Rescheduled DirtFish RallyCross Goes Off Without a Hitch 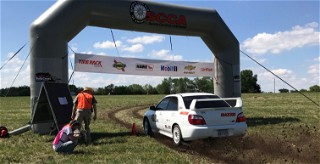 TOPEKA, Kan. (May 16, 2017) – Originally scheduled for early April, the 2017 DirtFish SCCA® RallyCross® Central National Challenge was put on hold until May 13-14, waiting for the grassy lots of Heartland Park Topeka to dry out from spring showers. Coincidentally, the reschedule placed RallyCross at Heartland Park on the same weekend as an SCCA U.S. Majors Tour and Track Night in America Driven by Tire Rack event. The unpredictable Kansas weather cooperated with this busy weekend as the sun shone bright and the winds stayed tolerable all weekend.

The 52 entrants at the Central Challenge each embarked on course 12 times: four runs Saturday morning, three Saturday afternoon, and five Sunday morning. This event utilized the same lot which will be home to the DirtFish SCCA RallyCross National Championship in October. Saturday’s courses, designed by Jan Gerber, were technical in the morning with offsets that rewarded car placement and patience. The afternoon course was a modified version of a similar flow, designed to avoid some of the areas beginning to rut. Jim Rowland designed a more open course for Sunday, giving competitors a look at a different part of the expansive site. Overall, there were few course changes caused by surface degradation, mostly just proactive measures.

In competition, the technical components of Gerber’s morning course contributed to a high number of cones across the board. In Modified FWD, Bret Hunter was able to keep it cleaner than his competition with just one cone called in a 1990 Honda CRX. He took an early lead which he would hold onto through the next two heats, laying down times that rivaled the Prepared AWD leaders in the same heat. Hunter’s final margin of victory was 51.181 seconds in SCCA RallyCross’ cumulative scoring. Jonathon Nagel claimed the final trophy in Modified FWD with a 1993 Honda Civic SI.

Reigning Prepared FWD National Champion Robert Seelig looks to be in fine form to contend for another title this year in his 1990 Honda CRX SI. He claimed victory with a 2.407-second margin after 12 runs. John E. England took hold of the second and final trophy position in a new-to-him 2003 Mini Cooper owned by Jon Jareo. England planned to only take exhibition runs at the event since his normal car, a 1995 Modified RWD Mazda Miata, already had two drivers. Jareo offered England the PF seat and that seems to have worked out.

In Stock RWD, Linda Duncan extended an offer to Matthew Grainger to switch from Stock FWD to her 1999 Mazda Miata. He accepted and laid down competitive times all weekend to take the win at his first RallyCross event, ever. The margin of victory was 3.612 seconds back to the second place and final trophy winner, Michael Lasater in a 2003 Mazda Miata.

Next, the DirtFish SCCA RallyCross National Challenge heads to the Rally Farm July 8-9 in Catlett, Virginia. More information about that event can be found here.