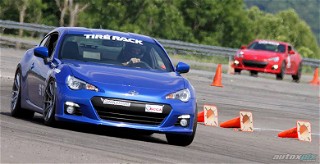 TOPEKA, Kan. (December 6, 2016) – The 2017 Tire Rack SCCA Championship Tour calendar has been released and is comprised of nine events, running March to July, that lead to the Tire Rack SCCA Solo Nationals in September.

New this season is a stop at Bristol Motor Speedway in Tennessee, as well as a visit to Toledo Express Airport.  The schedule is subject to change, but the planned 2017 Tire Rack SCCA Champ Tour program rundown is as follows:

The Tire Rack Championship Tour gets underway with the traditional Dixie Tour hosted by the “Tiny but Fierce” Dixie Region, and will surely again include a BBQ feast Friday night.  The Tour’s second stop will be hosted by Texas A&M Sports Car Club in Bryan, Texas, where a large expanse of pavement awaits competitors, along with Texas style BBQ delights.

From Texas, the Tour heads to Northern California for an event hosted by the San Francisco Region at a former NASA installation with a spread of pavement allowing for long courses.  And as usual, another Friday night welcome party known to be a blast.  Late in May, Champ Tour then makes a stop at Lincoln Airpark hosted by the Nebraska Region. As has become the tradition, competitors here will face a Solo Nationals course from the previous year but run in the reverse direction, along with a totally new layout.

June starts with an event held below Pikes Peak hosted by Rocky Mountain Solo.  A second June event is also planned for the Northeast with an event hosted by the New England Region at Devens Airfield. The transition from June to July is then greeted with a stop at Bristol Motor Speedway managed by the Eastern Tennessee Region.

The Tire Rack Championship Tour season then begins to wrap up with a weekend in the shadow of Mount Rainer hosted by the Northwest Region in Packwood.  The asphalt there comes with a lot of “character” as it features dips and rises, on- and off-camber turns that all combine for a very challenging experience for drivers.  And then to end the Champ Tour’s season, a trip to the ultra-smooth concrete of Toledo Express Airport, and more awesome BBQ goodness to cap off the year.

Tire Rack SCCA Solo Championship Tour events take place over three days on two separate courses. The opening day consists of Test and Tune opportunities, as well as a social gathering.  Then on the second day, competitors each get three chances to drive one course, and on the third day get three runs on another course. Like any other Solo competition, runs are timed to 1/1000th of a second and knocking a cone down means a two-second penalty is added to that time. The best times from each course are added together for the final class standings.