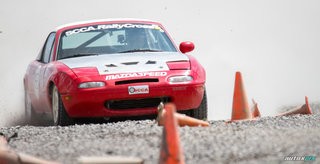 The 2016 SCCA RallyCross National Championship is coming up September 30 through October 2 at the National Balloon Classic venue in Indianola, Iowa.  So it’s time for down-and-dirty drivers to think about registering for the upcoming event.

The cost is $135 per entrant this year, which will be the event’s 10th anniversary.  Additionally, Shirts 101 has created special t-shirts for the occasion and the first 50 people to register will receive a free commemorative shirt.

The entry cap is set at 125 racers this year.  Late fees start at 11:59am Central Time on Monday, September 19, at which time the registration price will increase to $175 per entrant.

The RallyCross National Championship begins Friday, September 30, with an open “Test & Tune” session before competition on Saturday and Sunday.  There will again be three unique course layouts over the weekend, and drivers get at least three shots at each configuration.  Runs are timed to 1/1000th of a second with missed “gates” resulting in a 10-second penalty.  Class winners are based on the total time of all runs Saturday and Sunday.

Mark the SCCA RallyCross National Championship on your calendars and plan to come out so you and your car can rip it up in an open field.