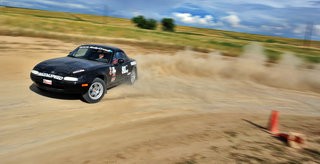 TOPEKA, Kan. (August 9, 2016) – About 70 miles east of Denver along Interstate 70 sits Agate, Colorado, which was home for the August 5-7 SCCA Central RallyCross National Challenge at the Colorado Off Road Extreme facility.

This event was the third and final RallyCross National Challenge for the year.  Conducted in a revitalized format that aims to mimic the success of the RallyCross National Championship, Fridays are open “Test & Tune” sessions before competition on Saturday and Sunday.  Each weekend has three unique course layouts, and drivers get at least three shots at each configuration.  Runs are timed to 1/1000th of a second with missed “gates” resulting in a 10-second penalty.  Class winners are based on the total time of all runs Saturday and Sunday.

Magnificent weather graced the plains of eastern Colorado over the weekend with temperatures in the upper 70s and a light breeze.  The well-packed dirt at the venue meant few course changes were required during the two days of racing.

The nearly 50 drivers that came out got a total of 16 passes across three different courses set up over the weekend.  Prepared Front Wheel Drive saw a fun, tight battle as Robert Seelig dug himself a hole on the Saturday morning course, but kept climbing closer to leader Antonio Serracino. Before the last runs, Seelig was just 1.047 seconds behind Serracino. Seelig needed a 46.6-second lap to take the top spot, but ultimately came up .033-second short and gave Serracino the win.

In Modified All Wheel Drive, winner Max Lawson laid the smackdown on the Class. However, second through fifth were close all weekend. Going into the last runs, Todd Briley was in second until he creamed four cones. Both Peter Zlamany and Chris O’Driscoll made clean passes and dropped Briley back to the fifth and final trophy spot.

Modified Rear Wheel Drive saw Patryk Matecki take the win. Bee Thao was running raw times that matched or were better than Matecki’s, but had cone trouble Saturday afternoon. It looked as though he would make a run at Matecki on Sunday, but Thao then hit another cone. If Thao had been clean, he would have won the Class.

On a side note, this was Thao’s third RallyCross National Challenge of the year. He, as well as Michael and Angelica Miller, managed to attend each of the three events on the calendar.

Next up for RallyCross competitors is the 2016 SCCA RallyCross National Championship September 30 through October 2 at the National Balloon Classic venue in Indianola, Iowa.

Image: Patryk Matecki on his way to a Modified Rear Wheel Drive win.