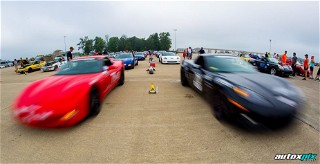 TOPEKA, Kan. (August 4, 2016) – The Tire Rack Wilmington Summer ProSolo was the second-to-last competition before September’s ProSolo Finale.  But the event, hosted by the Cincinnati Region with a well-balanced course designed by Gordon Maciulewicz, could be a precursor of things to come in Lincoln, Nebraska.

Sunday runs for Ladies 1 were packed with excitement as Tamra Hunt coned her first two runs.  This left the door open for Hunt to become the hunted as Shelly Monfort aimed to close the gap, eventually cutting it down to a scant .05-second.  Hunt red-lit her final runs, leaving her vulnerable as Monfort took to the left course.  Monfort put in everything she had, but in the process tagged a cone, thus negating a run that would have given her a 0.019-second lead. But instead, Hunt took the win.

It was another close race in Ladies 2 with Saturday leader Rachel Baker managing to drop some time as she became more comfortable with a borrowed C6 Corvette after her Porsche suffered an engine failure Saturday.  Jordan Towns, however, was able to drop even more time, vaulting her from fourth to victory by just under .2 second.  Cindy Duncan managed to close the gap to Baker, but fell less than a tenth short, with Jennifer Bedell and Julie Heaton also close behind to round out trophies.

The A Street battle between Tom O’Gorman and Mark “Alien” Daddio continued Sunday with a red-light infraction and dirty 33.2-second run by Daddio.  On his final right-side run, Daddio came up .4-second slower while staying off the cones.  It was an improvement in overall time, but not enough to catch O’Gorman who took the win by .3 second.  Behind Daddio in a relatively close third was Laurence Casey, with Jeff Cashmore and Mark Sarcevicz rounding out trophies.

More epic battles ensued in the third heat with Super Street R.  Matthew Braun set out to defend his lead, but Sam Strano made a solid attack.  He was able to clean up the left side run and improved on time to take a 3-tenths lead over Braun.   Josh Luster gained time but came up a tenth short of Braun and settled for third as Grant Reeve was set back to fourth. Tony Savini and Mike Snyder rounded out the trophies.

The heat four excitement was in E Street Prepared as an all-Mustang battle ensued with Class leader Bryan Mancuso trying to stay ahead of David Heinrich.  Mancuso’s two-tenths lead was holding going into the final two runs, as both drivers improved by about two tenths.  It was in those final runs that Heinrich made his move, picking up just enough time to nip the lead from Mancuso.  In the final run, Mancuso red lit.  This left Heinrich in first with Mancuso second just ahead of Ron Bistrais and Mark Stevens.

Despite the hectic competition within ESP, Mancuso was able to match his dial in enough through the challenge rounds to advance past G Street winner Jen Wong and face Daniel Gross.  A downed cone on the first run of that round led to a re-run, giving Mancuso a chance to advance as Gross red-lit his second attempt at the light.  In the next round, Mancuso faced David Spratte of H Street and advanced from there to the semi-finals.  There he faced Scott Wright who had defeated ESP class winner David Heinrich in the first round, Danny Popp in the second and Sam Strano in the third.  His streak ended against Mancuso as a cone on Wright’s first run gave Mancuso the advantage to head into the final against Street Touring Roadster driver Jed Peterson.  Into the final runs, Mancuso held just enough of a lead to even out the disparity in times between sides.  On the opening slalom, Peterson was the first to cone, but this was offset as Mancuso coned almost immediately after that, but was able to pull enough time on course to take his first Super Challenge win.  Joining Bryan Mancuso as challenge winners were Jordan Towns from L2, who won the Ladies Challenge, and Kim Whitener from Street Touring FWD, winner of the Bonus Challenge.

Full results can be found at the Tire Rack Wilmington Summer ProSolo webpage.  Next on the SCCA ProSolo calendar is the August 5-7 Tire Rack Blytheville ProSolo at Arkansas Aeroplex  in Blytheville, Arkansas.  For additional information on Tire Rack SCCA Solo, visit www.scca.com/solo.