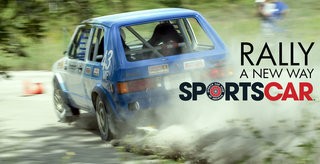 This article first appeared in the March, 2016 edition of SportsCar Magazine. SCCA members can read the current and past editions of SportCar digitally here after logging into their account; To become an SCCA member and get SportsCar mailed to your home address monthly in addition to the digital editions, click here.

The RallyCross program welcomes RallyTrials and RallySprint to the fold

In early December 2015, the newest SCCA programs were approved, RallyTrials and RallySprint. After a year of pilot events, the rules package was finalized and is now available on www.scca.com under the “RallyCross Rules” link on the RallyCross pull-down menu. The programs are already being well received by the rally community, with the Waste Management Winter Rally running its February event as a RallySprint and a half dozen other events in the approval process.

“The addition of RallyTrials and RallySprint to the ever-growing RallyCross program is a natural extension of unpaved SCCA competition, as it reflects the broader interests and desires of many in the RallyCross community and with rally enthusiasts in general,” says Howard Duncan, SCCA Senior Director, Rally/Solo. “While probably most of the SCCA RallyCross community is perfectly happy with the challenge and fun of RallyCross, there are members who would like a connection to the programs of the past, as well as a new challenge.

“When SCCA discontinued stage rally events over 10 years ago, many of our members had to look elsewhere to get their fix for an intense off-road rally experience,” he continues. “We have been able to maintain a good relationship with Rally America over the last 10 years, and we wish them success with their stage rally events. We look at RallyTrials and RallySprint as either an introduction to that world, or a way to get a feel for it at a lower risk and financial level. Either way, these events should be mutually beneficial to both organizations.”

Being event chairman of two pilot events, Scott Beliveau has learned a lot about RallyTrials and RallySprint. “The safety requirements for RallySprint are very similar to those of stage rally,” Beliveau says. “This creates a limited entry pool. Another requirement is that the events be held in a confined and controllable area so that spectators cannot casually show up along the racing route. This limits the length of the circuit or legs, typically to less than four miles. This may be beneficial to the organizing Region in that it allows two teams or drivers to use the same car, minimizing somewhat the equipment dilemma – in some cases, two drivers share the same co-driver also.

“At the New England events,” says Beliveau, “many of the competing teams consisted of RallyCrossers who have built their RallyCross cars into stage rally cars. These events are a great way for them to get their first rally-like experience and shake down recently completed projects. In most cases, the crewmembers that accompanied them are also from the RallyCross ranks.

“Rally schools, off-road parks, and unpaved areas at racetracks are typical venues for RallySprint. Using the maze of roads or trails allows different configurations to run a couple different legs over the course of the day. SCCA RallySprint will offer an exhilarating and adrenaline-fueled challenge while keeping safety of all those involved at the forefront.”

The RallyTrials portion of the program will allow competitors with cars built to SCCA hill-climb rules the chance to run a faster, more open version of a RallyCross.

Any request for additional information or sanction questions should be referred to SCCA Rally/Solo Program Manager Brian Harmer at bharmer@scca.com.

The RallyCross Board is very appreciative to all who helped bring RallyTrials and RallySprint out of the planning stages and is looking forward to the program growing and bringing a new demographic into the SCCA family.