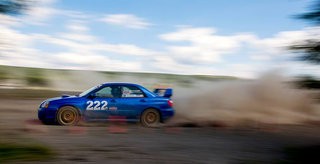 Hosted by the Washington DC Region at a location nicknamed “Gravel Mountain” near Frostburg, Maryland, this event was only the second ever RallyCross National Challenge conducted in the revitalized format that aims to mimic the success of the RallyCross National Championship.  On Fridays, open “Test & Tune” sessions are held followed by competition Saturdays and Sundays.  Each weekend has three unique course layouts, and drivers get at least three shots at each configuration.  Runs are timed to 1/1000th of a second with missed “gates” resulting in a 10-second penalty.  Class winners are based on the total time of all runs Saturday and Sunday.

Perfect weather greeted racers over the weekend.  The facility itself was filled with gravel, which made the surface “grip” substantially different from that of a dirt field where RallyCross events are usually held.  The three different course layouts over the weekend flowed well with a variation of sweepers and offsets to challenge competitors.

The largest Class of the weekend, Modified Rear Wheel Drive, was won by Joshua Hickey -- but the top five finishers were only separated by a couple of seconds.  The Prepared All Wheel Drive Class produced a close battle between Clifton Kangas and Mark Macoubrie. Kangas claimed a cone on his fourth run Sunday that gave a comfortable gap to Macoubrie, who then went out and set a smoking fast run to secure the win.  But the fastest lap of the weekend went to Zbigniew Lorenc who won the Stock All Wheel Drive Class.

This weekend’s event also included the new package where video of each new course layout is captured using a Garmin VIRB XE and made accessible to drivers for review prior to runs. Along with that, a course map was produced from the camera’s data and supplied to competitors.

Next up on the RallyCross schedule is the August 5-7 SCCA Central RallyCross National Challenge at Colorado Off Road Extreme in Agate, Colorado.