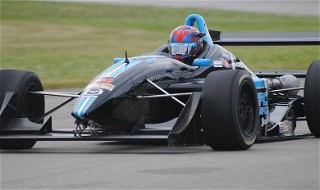 SOUTH HAVEN, Michigan (July 9, 2016) – While the clouds that moved overhead during Saturday’s SCCA U.S. Majors Tour at GingerMan Raceway may have looked soft and billowy, the competition on the ground was anything but right from the very beginning.

The thunderous GT-1, GT-2, GT-3, Touring 1 and American Sedan cars of Group 1 opened the day’s competition at the 11-turn, 2.14-mile track near South Haven, Michigan.  Joe Kristensen in an Acura RSX and Phil Lasco in a Mazda RX-7, both contesting the GT-3 Class, had a prolonged battle throughout the race that entertained many trackside onlookers.

“Phil stayed on me the whole race,” Kristensen said after taking the win.  “I was watching my mirrors maybe a little too much and made some mistakes, but I got the win and it was a lot of fun.”

After congratulating Kristensen on a terrific drive, Lasco said he found a couple places where he was perhaps a little faster than Kristensen.  “I kind of closed the gap a bit on the last lap.  But Joe’s an outstanding driver and went really deep into the last corner and got the job done.  Outstanding performance and a great race,” Lasco said.

In H Production, Matt Brannon in a Fiat X 1/9 was ahead of Tom Feller early in the Group 5 event.  After an extended yellow-flag session, only a few minutes remained in the race, which put a lot of pressure on drivers to make a move if they wanted to claim victory.

“I knew I was running out of time and had to make something happen,” Feller said standing alongside his Triumph Spitfire.  “I was faster through Turn 2 and that gave me a run going into Turn 3, which is where I got by and held on for the win.”

Another big winner Saturday in the Group 5 event was E Production’s Joe Moser behind the wheel of a Honda Prelude.  Moser has been pulling double-duty much of the year, competing in both E Production and Super Touring Under.  Many times this has meant he’d exit the track from one race, pour some fuel into the racecar, and head right back out for the very next race on the schedule.

“I wanted to find out which Class this car will be most competitive in for the Mid-Ohio Runoffs,” Moser said after getting the E Production win during day one at the GingerMan Majors.  “Honestly, this is exhausting.  I’m not sure I would do this again next year.  But it was fantastic to get a win today.”

Moser was unable to go back-to-back for wins today.  In STU, it was Rob Huffmaster in a Honda S2000 who foiled the attempt.

“I was second in STU most of the race running behind Moser,” Huffmaster said about his win.  “But like it always does, the GingerMan track gets super greasy later in a race.  So I just calmed down and let the race come to me.”

Racing continues Sunday at the SCCA U.S. Majors Tour at GingerMan Raceway with 24-lap or 35-min. afternoon races. Follow all the action live at www.scca.com/live.

Below are provisional race results from Saturday’s SCCA U.S. Majors Tour at GingerMan Raceway with Class: Name, Hometown and Car.

Photo: Sedat Yelkin on his way to a Formula Atlantic win Saturday at the SCCA U.S. Majors Tour at GingerMan Raceway in South Haven, Michigan.