At a Glance: Watkins Glen Majors 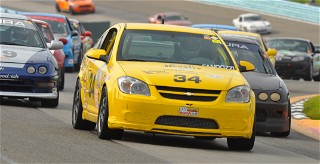 The Grandeur of The Glen – Watkins Glen International was established on the streets of Watkins Glen, New York in 1948 and is one of North America’s premier racing facilities. In October of ’48, the Sports Car Club of America conducted its first road race at Watkins Glen with a course that went through the town and Gorge Park. The circuit itself was expanded in 1971, as the ‘70s brought a wide variety of competition. Over the years, The Glen has hosted Can-Am, Trans-Am and Formula 5000 events, as well as Formula One, IndyCar and NASCAR races. The greatest names in motorsport have driven The Glen, and a number of SCCA drivers join their ranks this weekend. Follow all the action live online at www.scca.com/live.

Flourishing Fields – Along with the predictably strong showing from Spec Miata and Spec Racer Ford drivers, several other classes have good-sized fields this weekend for the SCCA U.S. Majors Tour at Watkins Glen International. H Production, GT-2, American Sedan and Formula F all have 12-car fields. Formula 500 looks to have another tight tussle with 11 drivers on hand. And Formula Vee has checked in with 15 drivers schedule to compete for a win. That means there will likely be some hotly contested racing within each of the seven race groups both Saturday and Sunday. Stay abreast of all the action live online at www.scca.com/live.

And Then There’s Super Touring Lite – Nearly 30 drivers are registered to compete this weekend in the Super Touring Lite Class. That’s a strong field in a competitive Class and should produce some great racing. Many of those drivers are “double dipping” as they’ll also be competing in Spec Miata earlier in the day. But with a couple races scheduled between the Spec Miata and Super Touring Lite races, drivers should have plenty of time to make the minor modifications required to race twice in the same day.

One to Go – This weekend’s racing at Watkins Glen International is the next to last event on the 2016 Northeast Conference schedule. The Conference’s final event will be the July 22-24 SCCA U.S. Majors Tour at New Jersey Motorsports Park in Millville, New Jersey. Races that weekend will utilize the facility’s standard 2.25-mile Thunderbolt Raceway circuit with no chicanes.

Live Timing and Notes:  Live Timing & Scoring, lap notes and more via the SCCA® Pit Board are available for all sessions through www.scca.com/live.