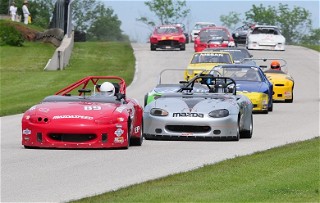 ELKHART LAKE, Wis. (June 18, 2016) – If winning was easy, there’d be no reward in the accomplishment. That may be the adage many drivers are contemplating after seemingly assured victories slipped away during the opening day of racing at the WeatherTech® Chicago Region June Sprints® SCCA U.S. Majors Tour at Road America in Elkhart Lake, Wisconsin.

In Prototype 2, the race belonged to Stohr WF1 driver Greg Gyann. By the end of just the first lap, he had a three-second lead on the competition. A full-course yellow in the middle of the race bunched everyone up, yet Gyann tore away from the others when the green flag came out again. But as he approached the starting line to take the white flag, something was amiss and second-place pilot Jake Thielmann flew by in his powder blue Stohr WF1 to take the lead and, one lap later, the victory. Gyann salvaged second.

If Gyann thought his luck was rough Saturday, he may want to chat with John Black. In a field consisting of more than 60 Spec Racer Ford and Spec Racer Ford Gen3 cars, Black established a three-second lead on the pack. But about 10 minutes into the race, tiny moments of white smoke puffed from the rear of Black’s SRF3 sled. Whatever the ailment was, it wasn’t slowing Black – until there was just a touch more than five minutes left in the event. It was then that Black pulled his car off the track and a hungry hoard of racers continued on without him to do battle. In the end, Brian Schofield triumphed over the others.

“John Black had oil coming out of his car from lap one,” Schofield said standing atop the victory podium. “You couldn’t get behind him. So I had to play it conservative, but it was still a battle out there.”

Continuing the theme of bad breaks was E Production’s Joe Moser in a Honda Prelude. He was able to maintain a small but steady gap on second-place racer Jon Brakke in a Mazda Miata. With only three minutes remaining in the race -- which equates to about one lap around the 4-mile, 14-turn Road America circuit -- Moser had a problem and Brakke blew by to take the EP win.

“Joe and I had a great race going,” Brakke said holding his checkered flag. “It looked like his rear tires were giving up, so I was able to close on him. Going into corner one, I saw him slow down and black smoke came from his tailpipe. If I would have ever been able to get by him if he didn’t have a problem, we’ll never know.”

Racing continues Sunday at the WeatherTech® Chicago Region June Sprints SCCA U.S. Majors Tour at Road America with 13-lap morning and afternoon races starting at 8am Central Time. The exception will be a 15-lap event for Group 8 (GT-1, GT-2, GT-3, Touring 1, America Sedan) toward day’s end. Follow all the action live at www.scca.com/live.

Photo: The #89 of Jon Brakke on its way to an E Production victory