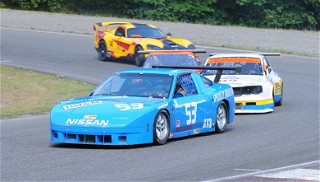 AUBURN, WA (May 29, 2016) – The rain that plagued Saturday’s qualifying returned sporadically at Pacific Raceways Sunday for Round Nine of the SCCA U.S. Majors Tour Western Conference event set amid the verdant hills of western Washington just a few miles south of Seattle.

Drivers raced to secure invitations to the 2016 National Championship Runoffs, presented by Garmin VIRB, and hold on to their chances for a prestigious Western Conference title. The Group 1 field took the track just after lunch, with rain still threatening. At his home circuit, Scotty B. White struggled to maintain the overall and Touring 3 lead. Challenging White for dominance was Charles Hurley. But White held the lead, finishing a slight 1.7 seconds ahead of Hurley.

As the afternoon went on, sunshine broke through and warmed the track. In the Group 2 race, Formula Vee’s Dennis Andrade was victorious over a nine-car field. It was Rick Payne who took Formula F honors before loading up to make the tow to next weekend’s Majors at Mid-Ohio.

Race Group 3 saw Scotty B. White again victorious, this time driving a Ford Mustang. But he trailed Super Touring Under ace Oscar Jackson Jr. and Michelle Abbate, both in Scion FR-S steeds, for the overall lead. And while Jackson claimed the STU victory, White harvested wins in Touring 4, Touring 3 and Touring 2 for good measure over the day.

Round Ten of the Western Conference Majors Tour takes place Monday at Pacific Raceways. More information is available at SCCA.com/majors.