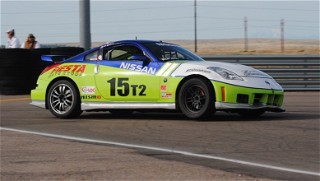 Drivers in the Formula Vee Class put on an incredible show both Saturday and Sunday on the 2.2-mile, 10-turn road circuit. Robert Neumeister and Tyler Hunter fought it out each day for a win with neither driver taking a flag-to-flag victory. On Saturday, Tyler managed to come across the finish line first. Then Sunday it was Neumeister that triumphed.

“Robert and I run together a lot,” Hunter continued. “He makes me step it up a notch to perform better. Great competition makes you rise to a higher level. It’s wonderful.”

Winning three of four races he competed in during the weekend, Robert Schader was almost able to claim the sweep in both Touring 3 and Super Touring Under. But Sunday in the Touring 3 Class it was Derek Kulach in a Nissan 350Z that won a shortened race.

“It’s always crazy when you’re flying through a corner and see lightning strike,” Kulach said after the race as the wind picked up, a storm cell darkened the sky and rain began coming down. “It was a shortened race, but Schader and I had a great time.”

Another driver able to overcome setbacks Saturday to claim a win Sunday was GT-Lite pilot Jonathan Goodale in a Mazda MX-5 Miata. He has not yet had the chance to put his personal car back together from a wreck in Daytona at last year’s SCCA National Championship Runoffs, but pulled together a deal earlier in the week to run a friend’s car at Pueblo Motorsports Park this weekend.

“A fellow competitor in F Production loaned me some tires because I was running DOT ones Saturday,” Goodale said. “I can’t wait to see what my lap times are because I know I’ve got to be faster than yesterday. But I’ve got a couple more races ahead before going to Mid-Ohio for the Runoffs.”

Round Nine and Round Ten of the Mid-States Conference 12-round schedule are now complete. Next up for Mid-States competitors is the Conference final event of the year July 2-3 at High Plains Raceway in Deer Trail, Colorado. More information about that event and the entire SCCA U.S. Majors Tour can be found at SCCA.com/majors.