Touring 3 To Undergo a Facelift 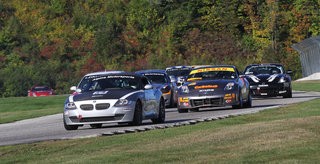 The SCCA Club Racing Board has announced its intention to re-position the Touring 3 (T3) class, with expected adjustments coming mid-season to reduce the pace of the front of the field.

The primary goal of T3 is to provide a platform for sports cars and sedans with high-performance, four-cylinder engines serving as its benchmark. When the Touring category was revamped in 2013 to absorb Showroom Stock, the resulting T3 class became faster than intended, with larger-engine, six-cylinder cars setting a performance benchmark that many four-cylinder cars could not achieve.

For 2016, many of the front-running cars in Touring 3 over the last several seasons, including, but not limited to the BMW Z4M, Ford Mustang V6 and Nissan 350Z and 370Z, will have two places to run—in Touring 2 or Touring 3. Many already have a dual-classification, and others will be classified in T2 soon. Data collected this season and last will dictate adjustments in early June 2016 (after Mid-Ohio) to reduce the pace of the six-cylinder cars that exceed the performance parameters of the class.

In 2015, Touring 3 became the first to fall below the 10-entry mark at the Runoffs®, meaning the race winner was not formally crowned a National Champion. Since then, the class has been bolstered by the inclusion of the 2016 Mazda MX-5 and MX-5 Global Cup car as well as a spec BMW E46. But the addition of these cars is just one step toward a healthy T3 class.

“There are a lot of cars in garages or racing elsewhere that should be competitive in T3,” SCCA Club Racing Board Chairman Jim Wheeler said. “Unfortunately, the pace of the class is currently a little too fast to be attractive to these cars, and many others that are now coming into the market. While we have made some additions to the class in 2016 that should help its overall health, we need to dial the lap times back a little bit to put the class into the appropriate performance window.”

Member feedback is always welcome through the official SCCA Club Racing Board communication platform at www.scca.com/crbscca.