Racing Blooms in Desert at Round Four of Western Conf. Majors 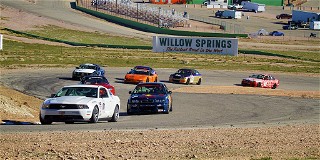 Other than the sun, something else hot all weekend was driver Tom Wickersham, of Piedmont, California. The Touring 3 and Touring 4 driver earned victories in both classes on Saturday during Round Three and Sunday during Round Four of the SCCA Western Conference U.S. Majors Tour.  And if that wasn’t enough, Wickersham set track records for Touring 3 in his Ford Mustang and Touring 4 in a Mazda RX-8 on Saturday, and then bested his own track record Sunday in Touring 3.  The secret to his success?  A little bit of tape.

“Right there on the dashboard, I have a blue piece of tape with the current track record,” Wickersham pointed out.  “I put that there so I keep pushing myself to be better. I like challenging myself.”

Someone else that had a “better” Sunday was GT-2 driver Robert Kahn, of Las Vegas.  During Saturday’s Round Three SCCA Western Conference Group 6 event -- which includes cars in the GT-1, GT-2, GT-3, Super Touring Under (STU) and American Sedan (AS) Classes -- Kahn set a track record in his Chevrolet Corvette.  However, he ended up off in the dirt in Turn 9 during that race.  On Sunday, dominant Group 6 driver Michael Lewis in his GT-1 Jaguar XKR leapt to an early lead.  But he ran into mechanical problems and GT-1 pilot Kenneth Davis inherited the top spot in his Corvette.  Then Davis experienced issues, which handed the lead to Kahn.  With only a handful of laps remaining, Kahn also began having troubles with his chariot.  But he was able to nurse the racecar home for the Group 6 overall win and GT-2 Class victory.

The open-wheel racers also had some close competition during Sunday’s Round Four.  Formula Vee racers Aaron Meyer, Skip Streets and Timothy Harris careened around Willow Springs nose to tail and side by side.  Near the race’s conclusion, Harris encountered car troubles and departed the fight.  Streets and Meyer battled on, but it was Streets that crossed the finish line first.

“Tim was strong and gave me a run the whole day. Aaron was there the whole time as well,” Streets said after a Mazza Sparkling Wine victory circle shower.  “It was just a fantastic run. A lot of fun. A great day.”

Rounds Three and Four at Willow Springs were the final 2016 SCCA U.S. Majors Tour visit to Southern California.  Next, the Western Conference series heads north for an April 8-April 10 event at Thunderhill Raceway Park in Willows, Calif.; followed by racing April 29-May 1 at Buttonwillow Raceway Park in Buttonwillow, Calif. More information can be found at SCCA.com/majors.

Provisional race winners from Sunday’s Round Four of the SCCA Western Conference U.S. Majors Tour at Willow Springs International Raceway, with Class, Name, Hometown and Car are as follows:

(For a web-resolution photo, right-click the photo in the story and “save as”)