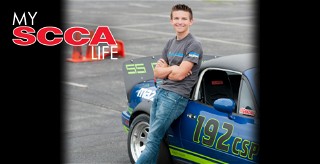 This article first appeared in the October, 2015 edition of SportsCar Magazine. SCCA members can read the current and past editions of SportCar digitally here after logging into their account; To become an SCCA member and get SportsCar mailed to your home address monthly in addition to the digital editions, click here.

It wouldn’t be unreasonable to say that my life is a sculpture, molded and crafted by the SCCA. After all, while I’m 17 years old, I have been an SCCA member for over two-thirds of my life.I began competing in Solo at the age of 5 (in 2003) with the Washington DC Region, where my family is heavily involved with the program. I then attended the 2006 Walnut Ridge ProSolo in Arkansas, where I had to receive an exception in the rules to participate, as I was a few weeks shy of turning 8 years old. We then lobbied – and successfully won – junior kart drivers a place at the Tire Rack Solo National Championships, where I was fortunate enough to be one of the first participants in 2008. I received my first Solo National Championships win in the inaugural year, and have collected four more wins at Nationals.

In 2013, I received my SCCA competition license and spent a successful season competing with a Showroom Spec Miata in the Mid Atlantic Road Racing Series, as well as participating in the Charge of the Headlight Brigade 13-hour endurance race at VIR. Returning to the Solo scene in 2014, I became the first driver to compete in a car at the Solo Nationals while still on a learner’s permit, with my gracious mother riding shotgun.

Currently, I am competing in a C Street Prepared Mazda Miata alongside my mother and father, making it quite the family affair. I act as one of the novice coordinators on the Washington DC Region Solo committee, and work as a driving instructor for the Region and Evolution Performance Driving Schools. More recently, I have been able to use my skills and experience from the SCCA to become a writer for SoloMatters, as well as reviewing cars on my personal blog, www.thestudentdriver.blogspot.com.

Some of my best memories come from participating at SCCA events. I am so thankful for all the great experiences I have had thus far, and am excited for what’s to come.