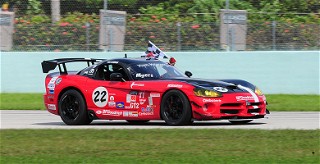 As was the case on Saturday, Spec Miata came down to the final lap and the final corner. For most of the race, polesitter Danny Steyn, of Fort Lauderdale, Selin M. Rollan, of Miami, and Blake Clements, of Houston, Texas, were glued together, working to break away from the rest of the 47-car field. With 15 of the 22 laps complete, Steyn, who led all but the final lap in Saturday’s race, retired with a wheel bearing issue, leaving Rollan and Clements to settle first place.

Clements tested his run around the outside of the final two oval corners with three to go and tucked back in behind Rollan’s No. 87 BSI Racing/Apex Alignment/Rossini Mazda Miata waiting for the final lap. As they made the run around the oval the final time, Clements went high and swept alongside, edging ahead in Turn Four. But the move wouldn’t stick, as Rollan was able to use the side-draft to edge ahead by a nose, officially 0.025-second.

In the Spec Racer Ford group, Kerry Jacobsen, of Deland, Florida, took his second SRF3 class win of the weekend in the No. 39 Comprent Motorsports entry after battling early with Jim Goughary and Brian Schofield. In SRF, Quinten Nelson, of Newark, Ohio, earned his second win of the weekend in his No. 27 Alliance Autosport entry, edging team boss and multi-time National Champion Scott Rettich by just 0.076-second.

Tim Myers, of Atlanta, Georgia, scored a pair of class wins after having a tough day on Saturday. Myers battled with Saturday’s Touring 1 winner Ernie Francis Jr. to win that class in his BFG/ACIW/Carbotech/The Hammer Dodge Viper ACRx. In Touring 4, he battled Saturday winner Don Knowles to take the win in a similarly supported Mazda RX-8.

Tim Kezman, of Franksville, Wisconsin, chased Saturday Touring 2 winner Preston Calvert for 21 laps before seeing an opportunity to get past on the final tour around the 2.3-mile oval/road course to win in his No. 4 Calypso Lemonade/Fall-Line Motorsport Porsche 997.

In B-Spec, Chi Ho and Darren Seltzer, both of Orlando, again battled all race long in their Honda Fits, with Ho taking his second win of the weekend in the No. 0 BFGoodrich/HPD/Dynasty Automotive Honda.

Finally, 17-year-old Ryan Norman, of Aurora, Ohio, capped off a weekend sweep in Formula Atlantic, taking the overall win in Group 6 for the second-straight day in his No. 48 K-Hill Motorsports/FlipSide Swift 016/Mazda.

For full event results, please visit www.scca.com/homesteadmajors. The SCCA U.S. Majors Tour next travels up the center of the state to Sebring International Raceway, with qualifying beginning Friday, January 15.