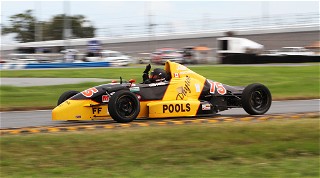 Payne had a great race start in his No. 75 Payton Pools Van Diemen RF99 Honda. He picked up several positions as the green flag flew and then steered clear of two full-course caution incidents in the race’s first five laps that eliminated four of the top 12 starters.

“Starts have always been my thing,” Payne said. “I love starts of races. I don’t know how I ended up 10th on the grid. We didn’t feel like a 10th place car going in, I know that sounds a little cocky, but that’s a fact. We did not feel like we had a 10th place car so I just kind of made a bit of a move at the start, a couple of guys touched wheels, I got through and sort of set myself up to run with the leaders in fourth.”

Valet and Tire Rack Pole Position starting driver Tim Kautz joined Payne as the only drivers to lead the race. Along with Generotti in the top four, the group quickly gapped the rest of the field when the race finally ran clean and green from lap eight to the finish.

“I think the four of us were pretty equal through the majority of the track,” said Generotti, who drove his No. 13 Dangerous Cargo/Lee Racing Swift DB1 Ford. “Rick did a great job of defending his position. Bill and I were trying to get around him at the end, we were checking each other, seeing when was the best opportunity to get in that draft and slingshot each other, but there just wasn’t enough laps.”

Kautz was up front for a race-high 11 laps in the No. 88 Braeburn/Hoosier/TwoDogg/Euroquipe Piper DF3D Honda but wasn’t there at the end after he skimmed the wall while heading into the Bus Stop chicane while leading on lap 13. Valet took the lead and was closely followed by Generotti and Payne.

“It took me by surprise,” said Valet, who races the No. 83 Drivers Services/Loynings Engines Swift DB6 Honda. “I knew something had to be happening because Jason backed out at the last second before we got down to the braking zone. Once he backed out, Tim hit the brakes and went straight into the wall, I hit the brakes and got majorly sideways, so there had to be something down on the track there.”

“It looked like there was some sort of debris up front, which is why I let off, and then I saw Tim go in the wall,” Generotti said.

Valet, who led only lap 13, thought the race might have been over after Kautz’s incident.

“When we saw Tim go off we weren’t sure if that was going to be the last lap,” Valet said. “So I was coming around grinning, thinking this could be good, but we knew it would be interesting going into the Bus Stop the next lap because there was oil or something slick down on the track. The braking points were going to be all over the place, but Rick made a big commitment going into that corner and took the spot.”

Payne drafted by both Generotti and Valet in one major move entering the Bus Stop and held them off in the final run through NASCAR Turns 3 and 4 for a narrow .110 of a second victory. The top three in total were split by a scant .150 of a second. Payne’s winning average speed was 90.749 mph and he set the fastest race lap with a time of 2:03.383 (103.872 mph).

While the live broadcast of all 27 National Championship were available live at SCCA.com, each race will be on demand in the coming weeks.

Image: No. 75 Rick Payne won the Formula F race to earn his first National Championship in the SCCA Runoffs presented by Garmin VIRB at Daytona International Speedway on Sunday.