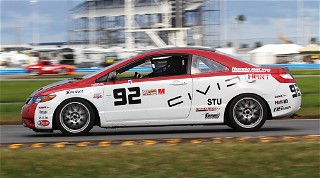 “It’s been a long time,” Schmitt said of his first win. “We put a lot of effort in, running in E Production and now STU and Super Touring Lite, it really feels great to finally win one.”

Schmitt chased Heinrich’s No. 10 BFGoodrich Tires/Pagid/VAC/2002racing.com BMW M3 for the opening five laps, until Heinrich spun going into Turn One and impacted the tire barrier. That contact brought out a full-course yellow, erased Schmitt’s new-found lead and set up a lap-nine restart.

Following the restart, Schmitt’s No. 92 Hoosier/Red Line/HPD Honda Civic had Simmers’ No. 45 Hoosier/Rebay/United Motorsport Volkswagen GTI all over his bumper.

“That was my plan all along,” Schmitt said. “I didn’t know if I could get past [Heinrich], so I just wanted to push him as hard as I could and save my tires. He was really lose the first couple of laps, and really over-cooked it in Turn One.

“Anthony [Simmers] had a couple of good restarts and I was like, oh my goodness, I have to deal with this. He recognized where I was a little loose in the kink and I had to protect the inside line there a couple of times, and he didn’t hit me and we had a really good race. “

Simmers pushed hard to try to force Schmitt into the same situation as Heinrich, but ultimately backed off for his runner-up finish.

“The first part of the race, I tried to stay close, and then I realized I didn’t have anything for these guys,” Simmers said. “I couldn’t stay in the draft, so I decided I would just click it back a notch and try to save my tires to make it to the end and hold on to another podium.

“I got a good restart, and it seemed like maybe [Schmitt’s] tires were going a little bit, and so I tried to push him a little bit at the end. I was able to stay with him after the second restart for some reason, otherwise it was a good fun drive and a clean race. I got up next to him a couple of times, and he gave me room. It was a really fun time out there.”

“It was pretty exciting from my seat,” Jackson said. “I knew this was going to be a tough race, a lot of people would be gunning for the front. I saw a couple of crashes in front of me, I got lucky there. The main thing was, I knew I had to be there at the end, and carry a good race pace. I ran my fast lap at the end, so it was good to get there.”

Ian Mullen, of Bradenton, Fla., finished fourth in the No. 155 RacingBrake/Caveman Enterprises/MSC BMW 328is was the fourth make in the top four, followed by Gary Frierson's No. 141 G an A inc Mazda Miata.