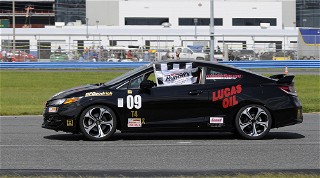 DAYTONA BEACH, Fla. (September 25, 2015) – Philip Royle, of Winnetka, Calif., led every lap to win the T4 race at the SCCA National Championship Runoffs presented by Garmin VIRB in the No. 09 Honda/BFGoodrich/HMS/Lucas Oil Honda Civic Si. Lance Stewart, of Coconut Grove, Fla., finished second in the No. 77 Hoosier/Mazda/Hawk/Summit Mazda RX-8 and Michael Tsay, of Irvine, Calif., was third in the No. 21 Honda Performance Development/THR-W Honda Civic Si.

Royle won in a Honda Civic Si that was making its first race start but he and the team didn’t let some new-car teething issues stop them from victory.

“I had about everything that could tell me what I am doing in the car fail,” Royle said.  “My data system turned off and I was using my phone to read live timing, and then that went off.  Then, on the last lap, my left front tire gave up. These BFGoodrich tires are great, but abusing them with a front-wheel drive car at 3,000 lbs. for 14 laps, the front left gave up and with one lap to go I was seriously wondering if I was going to make it.”

“We had a great car, we gave it all we had but it just wasn’t enough,” Stewart said. The last few years I feel like I am Mr. Second Place. I have second place down really well! It is a great feeling to come to the Runoffs, this is our World Series, and I won it my first time out back in 1986.  I really wanted to do it here too but we came up just a little short.”

Tsay avoided an opening lap skirmish in Turn 1 to improve from sixth on the grid for the third place finish.

“We were three across at the start,” Tsay said. “I got bumped in the rear in Turn 1, the tail slid out and I thought I was done but I just kept my foot in it and merged back in to traffic. It was a tough run trying to catch up with Lance but he had just a little bit more.”

Four different manufacturers were represented in the T4 top five.

Michael Scornavacchi, of Matthews, N.C., finished fourth in the No. 25 Angry Sheep Motorsports/Hoosier Ford Mustang and Toby Grahovec, of Little Elm, Texas, completed the top five in the No. 24 Classic BMW/Hoosier/Carbotech BMW Z4.