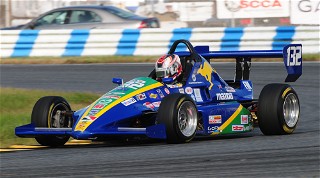 Burton-Harris started on the Tire Rack Pole Position in his No. 132 Si Partners/Sydney Sports/GMG Formula Mazda, and ticked off a series of steady laps to get into the lead and cruise to a 9.906-second win.

“This is pretty amazing,” Burton-Harris said. “We’ve worked so hard all year. The whole winning part is great, I mean it feels amazing, but just being here and driving on this track is great. This time 10 years ago, we used to come to Orlando for my father’s business and this used to be my one trip, to do the tours. To actually go around there on the track itself is just an amazing feeling. For the SCCA to put on this event in Daytona, just the year that I was starting out in cars, I feel very fortunate.

“Going into this race, we had no idea what was going to happen. You never really know on these super speedways, even with the massive infield. On the opening lap, Carson stuck really close on my gearbox and he was really on me in the infield. He drafted by me, and I thought, this is going to be a really entertaining race. But my car just came on, and toward the end of the race we were getting quicker and quicker, which is a dream for a driver.”

With Burton-Harris in the clear, the battle for the final two podium positions came down to a back-and-forth battle between Weeder’s No. 28 Weeder Motorsports Formula Mazda and Anderson’s No. 1 HASA Pool Products Formula Mazda.

The pair swapped the position nearly every lap on the banking, with Weeder using the draft to get past just before the white flag.

A fast final lap from Weeder had him clear of Anderson, and held on for second in his second career Runoffs race.

“It was a little nerve racking at the end; He caught up to me and we started losing our grip on the infield,” Weeder said. “We go to the white flag, and he was behind me, and I just knew I had to keep the lead. I had seen before that when he tried to get past me on the straightaway, he didn’t have enough to finish the pass, so if it was going to happen it was right at the checkers.”

It’s the fifth career podium for Anderson, the 2014 National Champion, who has a win and three runner-up finishes.

“I definitely wanted to have a good run through the chicane, and I wasn’t able to hang in his draft,” Anderson said. “The one thing that changes the game here at Daytona is the set up, and I was a little more dialed in for the infield, and Carson is all about having a fast car on the speedway. I knew I was going to have to be tucked in tight to have a challenge at the end, but we did have an awesome race.”