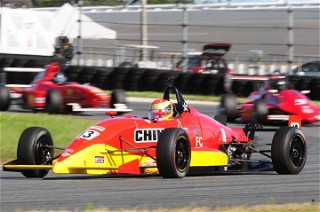 DAYTONA BEACH, Fla. (Sept. 23, 2015) – The penultimate day of qualifications for the 2015 SCCA Runoffs Presented by Garmin VIRB at Daytona International Speedway was dampened by overnight and morning rains, and the proceeding afternoon session were left with a green track and high winds. When the day ended, all but one of the 28 provisional Tire Rack polesitters held the top spot.

When racers awoke on Wednesday, the ground was very wet as a result of overnight rains that affected the Daytona Beach area. Just as the track began to dry mid-morning, another rain shower moved through the area to wet the track. The 30-minute rain storm hovered over the speedway and was gone before the final qualifying session of the morning. The clouds burned off during the lunch hour, revealing sunny skies which quickly dried the 12-turn, 3.56-mile road/oval course.

Michael Varacins, of Burlington, Wisconsin, was one of the few front-running drivers to make a move up the time charts on Wednesday. Driving the No. 65 Speed Sports Engineering/Veetech Speed Sport AM-5/Volkswagen in Formula Vee, Varacins improved his best lap by 0.6-second to move from fourth to second on the provisional grid. The time puts him just 0.08-second short of Roger Siebenaler’s No. 72 Autowerks/Hoosier Mysterian M2/Volkswagen, and the same distance short of his seventh consecutive pole – which would tie an SCCA Runoffs record.

Gianpaolo Ciancimino, of Coral Springs, Florida, made progress in his No. 99 GC&G Services Inc./Young Racing Stohr WF1/Suzuki Prototype 1. While the time got him closer to that set by Jim Downing, in the No. 63 Downing Atlanta Inc. Downing Atlanta Inc DAY-02/Mazda, Ciancimino was unable to improve his provisional grid position. Downing still holds the Tire Rack pole, while Ciancimino is second.

In GT-1, John Heinricy, of Clarkston, Michigan, closed the gap on Wednesday to get closer to provisional pole sitter Michael Lewis’ No. 12 Goodyear/Pegzlist.com Jaguar XJR. Despite a seven-tenths improvement Wednesday, Heinricy’s time of 1:48.989 is still more than three seconds behind Lewis.

John Kachadurian, of Ft. Lauderdale, Florida, arrived at the Runoffs for the first time on Wednesday, and drove his No. 85 The Kachadurian Group/Fall-Line Porsche 911 into the second position in GT-2. Current provisional Tire Rack polesitter Jordan Bupp, of Ft. Lauderdale, Florida, was able to improve his time at the controls of the No. 81 American Speed Factory Ford Mustang to 1:53.996, eight tenths clear of Kachadurian.

Chi Ho, of Orlando, Fla., took over as the provisional Tire Rack polesitter in B-Spec when the No. 64 BFGoodrich Racing/HPD Honda Fit of his teammate, Darren Seltzer, saw his Tuesday times removed for a technical infraction. Ho now holds the top spot in the No. 07 BFGoodrich/HPD/Dynasty Automotive Honda Fit 0.318-second over 12-time National Championship Heinricy’s No. 35 Hoosier/Mobil 1/Hawk/Matick Chevy Chevrolet Sonic. Seltzer now sits sixth on the grid.

The fourth, and final, day of qualifying is set to start Thursday at 8:00 a.m. (EDT). Following that session, Tire Rack pole positions and starting grids will be set in preparation for three days of racing.

Each of the 28 races will be carried live all weekend long on SCCA.com.

Additional information on the 52nd SCCA Runoffs Presented by Garmin VIRB at Daytona International Speedway, including a full schedule, entry list and results, can be found at SCCA.com/Runoffs

DAYTONA BEACH, Fla. – Provisional pole sitters through Wednesday’s third day of qualifying for the SCCA Runoffs Presented by Garmin VIRB at Daytona International Speedway. Drivers are listed by Class: name, hometown, and car. * - Indicates a change from the previous day.