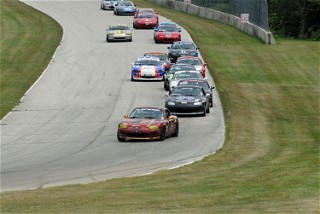 ELKHART LAKE, Wis. (July 26, 2015) – Round 10 of the Northern Conference SCCA U.S. Majors Tour, part of the SafeRacer Club Racing Program, was held in noticeably cooler conditions than Saturday’s sprint races. The result was three new lap records at a track that is no stranger to SCCA Club Racing.

While the traffic was faster at the 4.048-mile, 14-turn road course, the race results were still close in many classes. At one point the skies threatened rain during the scheduled 12-lap feature races, but that threat passed over the facility without affecting the competition.

Group One, made up of the Touring classes, provided close finishes among all three of those classes. In Touring 2, Tim Kezman, of Franksville, Wisconsin, was the winner in his No. 44 Calypso Lemonade/Fall Line Motorsports Porsche 911 by 0.553-second over Matt Slavens. Touring 3, saw J. Patrick Womack, of Burr Ridge, Illinois, win by 0.909-second in his No. 2 Laurel BWM/Hoosier BMW Z4.

Voytek Burdzy beat winner Danny Bender, of Northbrook, Illinois, to the line, but received a post-race penalty that landed him in third. In his No. 15 Bravo Trailers/BFGoodrich Tires/Autobarn Mazda MX-5, Bender scored the weekend sweep. Burdzy reset the T4 lap record with a time of 2:40.617.

Scott Rettich, of Columbus, Ohio, had a wonderful day after taking two class wins – one each in Spec Racer Ford Gen3 and Formula Enterprises - and setting a new track record in FE. In SRF3, Rettich crossed the line first with the nose of his No. 17 Alliance Autosports/PDI Communications SRF3 just 0.025-second ahead of Bobby Sak. Additionally, Rettich now owns the new lap record in SRF3 with a time of 2:32.578.

Justin Hille, of Canfield, Ohio, came out on top of the Spec Miata field. His No. 8 Hilltrux/Roush Mazda Miata crossed the line just 0.523-second ahead of Saturday winner Kyle M Webb.

Jeff Shafer was the final driver to reset a track record as he lowered the Prototype 2 record to 2:10.902.