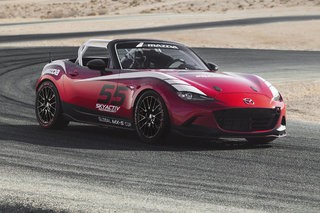 Mazda is in the process of developing the 2016 ND MX-5 into a factory built race car, the basis for the MX-5 Cup. Much of what will make this version a great race car comes standard on the street model. This generation is significantly lighter than its predecessor and features reengineered suspension geometry. Both of these updates create a dramatically different drive than the NC.

“The ND MX-5 brings back memories of the original NA chassis,” says Andrew Carbonell, a racer in both Spec Miata and the Continental Tires series in a Freedom Autosport MX-5. Carbonell had the chance to drive one of the ND development cars at Mazda Raceway Laguna Seca, a track with which he is quite familiar, during the recent TUDOR/MX-5 Cup race weekend (where he won the Continental race with Liam Dwyer).

“By memories, I mean a lightweight chassis design that responds to the driver's inputs with the touch of a finger,” he continues. “This nimble feel gave original Miata owners the sensation of being ‘one’ with the car. It gave them the confidence to push the limits through a corner. This is what the ND has brought back to life; a chassis so nimble you just have to think about what direction to go and it goes. The harder we drove around Mazda Raceway, the more the ND asked for it.”

Mazda hopes that it has created a new MX-5 with many of the same characteristics which made the NA Miata a favorite for many Club Racing and Solo competitors. Read the complete story here.