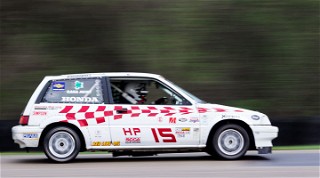 The Formula F battle matched up two multi-time National Champions during the still-dry Group 3. Tim Kautz ran a conservative early pace in the No. 88 Braeburn/Two Dogg/Hoosier Piper DF3D/Honda, but had his mirrors full of the No. 31 Morgan’s Collision Center Spectrum of Scott Rubenzer. Kautz answered the call, upping his pace and pulling away to a 21.075-second win.

Things got very interesting in Group 4, with sprinkles while the Production classed cars were on the grid. Some chose to put on rain tires and others remained on the slicks, and the skies opened up at the midway point of the race.

The downpour was so sudden and hard that officials elected to checker the race on lap 17 for safety, and the rest of the day was run under wet conditions.

The Northern Conference returns to action May 29-31 at Mid-Ohio Sports Car Course in a joint event with the Northeast Conference.