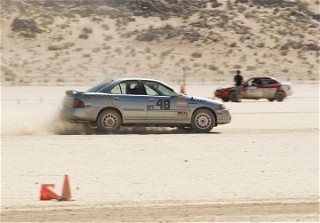 LUCERNE VALLEY, Calif. (May 29, 2008) – The SCCA RallyCross National Challenge held its fourth event of the season at Johnson Valley OHV Park in Lucerne Valley, Calif., on May 17th. Stock Front-Wheel Drive produced the closest finish of the event. Allen Lim’s Honda Civic, John Black’s Dodge Neon and Bill Martin’s Nissan Sentra SE swapped fast runs throughout the 10 runs. Martin came out on top by 5.09 seconds over Black. Lim wasn’t much farther behind in third. Jayson Woodruff’s Toyota MR2 was the Stock Rear-Wheel Drive winner. Prepared All-Wheel drive was as closely matched. Trent Koury took an early lead in his Subaru Impreza, but could not stay consistent with course changes and fell down the order. Instead it was Brian Francis’ Impreza the ended the day on top, more than 23 seconds ahead of his nearest competitor Aaron Ekinaka. SCCA Solo ace Jason Isley gave RallyCross a try in Johnson Valley. As part of a feature story for the July issue of SportsCar, the magazine put together a Nissan Sentra SE-R intended for Prepared Front-Wheel Drive competition, but moved up a class to Modified Two-Wheel Drive upon seeing the large entry when they arrived. Despite a slow start, Isley improved with each run and managed to take the win in M2 by more than 30 seconds over the Honda Civic of Robert Miller. In Modified Four-Wheel Drive, Walter Park’s Subaru Impreza was strong all day. Despite some quick runs from Lyn Clarke’s Impreza, Park took the class by 16.96 seconds. The next event on the RallyCross National Challenge schedule is June 14 at Summit Point Motorsports Park in West Virginia. It will be the Eastern States Championship Event. For more information and full results from Johnson Valley, click the green Rally tab at the top of the page.