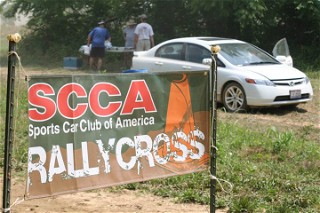 SUMMIT POINT, W.V. (June 18, 2008) – The Washington D.C. Region welcomed a healthy crowd of more than 40 entrants to Summit Point Motorsports Park for the first ever SCCA RallyCross Eastern States Championship. The Eastern and Western States Championships were created this season to give RallyCross competitors a chance to size up their competition before the RallyCross National Championships in October, as well as offer those who can’t make it there the opportunity to earn some bragging rights. With competitors arriving from up and down the East Coast, the RallyCross field at Summit Point was the largest yet of the season. Unfortunately, mother nature was not in a cooperative mood. Not only were temperatures hot and humid, but two thunderstorms slowed the event to a halt and left the all-wheel drive classes without any afternoon runs. Of the classes that were able to complete the day, Rob Bergstrom was victorious in the large Modified Two-Wheel Drive class. Driving a Nissan Sentra, Bergstrom beat Hal Denham and his Volkswagen GTI by 22.57 seconds. Utah Region’s Jon Olschewski made the trip out to West Virginia and finished third in a Nissan Sentra. He didn’t make the trip from Utah however, Olschewski is currently stationed with the Army in Newport News, Va. In Prepared Rear-Wheel Drive it was the BMW 318 of Wayne Moubray over the Volkswagen Karmann Ghia of Brent Bousman. Keith Little was the Stock Rear-Wheel drive winner in a Mazda Miata. Tim White took home the Stock Front-Wheel Drive victory in a Honda Civic Si by 26.43 seconds over the Dodge Neon of Markus Houser. It was a shame the all-wheel drive classes didn’t get a full day of runs in, as some excellent battles were unfolding. The dueling Subaru Imprezas of Colin Bombara and Carmen Renzi were separated by only 8.53 seconds with the edge going to Bombara. Eight seconds is also what separated the next three in order, Matthew Kane (Subaru Impreza), Chase Niblett (Subaru WRX STi) and Josh Armantrout (Subaru Impreza STi), from Renzi. It was closer still in Prepared All-Wheel Drive, where Jared Lantzy topped Mark Hoerath by a mere 0.79-second! Both drivers were in Subaru WRX Wagons. In contrast, Jon Kramer had no problem with the Modified All-Wheel Drive class, pushing his Subaru Impreza to a lead of more than 16 seconds over Matt Berkebile’s Impreza before the rain came. The RallyCross Western States Championships are up next, June 21 – 22, at Washington County Fairplex in Hillsboro, Ore., RallyCrossers on the east side of the country will also be able to toss up dirt this weekend with a regular RallyCross National Challenge event planned for Preble County Fairgrounds in Eaton, Ohio, on June 21. Visit www.scca.com/rally for more information on both events and full results from the Eastern States Championship.