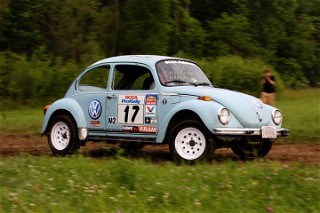 ST. EATON, Ohio (June 30, 2008) – While the SCCA RallyCross Western States Championships unfolded in Oregon, Rally enthusiasts east of the Mississippi were gathering at Preble County Fairgrounds, where the Western Ohio Region was hosting another RallyCross National Challenge event on June 22. There were good turnouts for Stock All-Wheel Drive and Stock Front-Wheel Drive. After winning SF at the RallyCross Eastern States Championship the weekend prior, Tim White earned his second-consecutive SF victory. Like his win at Summit Point, White piloted his Honda Civic Si to victory by more than 20 seconds over second place. While 2007 SA National Champion Brent Blakely was competing in Oregon, the man who finished runner-up to Blakely at the National Championships, Josh Armantrout, was dominating in Ohio. Driving a Subaru Impreza WRX, Armantrout earned the SA win by more than 35 seconds. Stock Rear-Wheel Drive was won by Randall Nick in a Ford Crown Victoria, the sole entrant in the class. Scott Johnson scored one for Mitsubishi in Prepared All-Wheel Drive. Johnson beat out seven Subarus to take the PA crown by 12.7 seconds in an Evo. Prepared Rear-Wheel Drive and Prepared Front-Wheel Drive were each single-car affairs, handing wins to John Dokler in a Mazda RX-7 and Chris Hastings in a Ford Escort. Dan Coughnour and Josh Stuckey had a close battle in Modified Two-Wheel Drive. Coned runs cost Stuckey and his Honda Civic dearly, however, as Coughnour took the win in a classic Volkswagen Beetle by just 8.9 seconds. The closest finish of the event came in the largest class, Modified Four-Wheel Drive. The Subaru STi of Elliott Sherwood kept pace with Randy Lee’s STi every step of the way and both competitors registered one coned run apiece. With all eight runs totaled, Lee edged Sherwood by a mere 2.1 seconds. RallyCross competitors have more than a month off before their next event at Corcoran Lions Park, in Cororan, Minn., which is scheduled for August 3. For full results from Ohio and more information on upcoming RallyCross events, click the green Rally tab at the top of the page. -30-