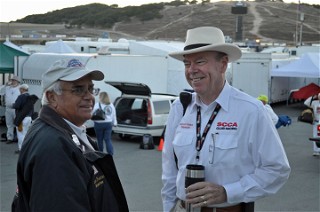 TOPEKA, Kan. (March 3, 2015) – Dennis Dean was given the 2014 John McGill award, the final SCCA Club Racing award to be given out this season. The honor was bestowed upon Dean this past weekend as part of the Northeast Division Steward Training Seminar, with NEDIV Exec Steward Kathy Barnes in the role of presenter.

The award is given to one Club member who is deemed to have made a significant contribution to the Club Racing program. The winner is chosen by the members of the Club Racing Board, in concert with the SCCA Chief Operating Officer.

“This is not an award you work for,” Dean said. “This is an award that comes to you. For five years, while I served as the Vice President of Club Racing, one of my duties was to partner with the Competition Board to select the winner of the John McGill Award. Very few things I did then were as important to me as making that selection, because I had a deep understanding of its significance to the SCCA and to Club Racing. Because of that, I am deeply humbled by being added to the roll of honorees.

“To be put on a list with people like Frank Schultheis, Johnny Bornholdt, Rob Walker, and Sue Roethel is something I would never have dreamed could happen and I am honored beyond my capacity to properly articulate it.”

The presentation of the John McGill award signifies the final annual SCCA award to be given out for 2014. While the top Club Racing driver, Andrew Longe, was awarded the President’s Cup at the SCCA Annual Convention, many of the other top honors for those involved with the Club Racing program were given away at Divisional and Regional events held throughout the winter months.

A complete list of awards given out by the Club can be found by visiting http://www.scca.com/about/?cid=44418. The honors include those given out for service to the Club, in general, as well as the individual areas of competition.