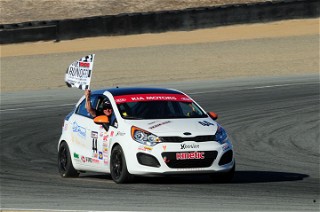 The 2014 SCCA National Championship Runoffs® at Mazda Raceway Laguna Seca marked Kyle Keenan's first Runoffs attempt. Driving a Kia Rio 5 in B-Spec and racing all season on a tight budget, the 24-year-old Keenan was given a new set of tires by fellow B-Spec competitor and eight-time National Champion David Daughtery in time for the last qualifying session. Keenan used those tires to jump several positions on the grid to start in second place, now well ahead of Daughtery, and Keenan drove a smart and quick race to win by 3.57 seconds.

“The whole tale had showcased what amateur racing in SCCA is all about: sportsmanship, determination, and talent,” the story on RACER.com said.

All of the information on RACER of the Year 20, along with more news on SCCA and SCCA Pro Racing activity, can be found on RACER.com.