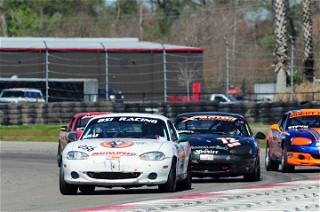 AVONDALE, La. (March 7, 2015) – The Southeastern Conference is one step closer to the midway point of their 2015 schedule as the Mid-States Conference opens their season as part of the SCCA U.S. Majors Tour race weekend at NOLA Motorsports Park in Avondale, Louisiana, March 7-8. This event is the first dual-conference event of the season, and second in Majors history. Later in the year, there will be two other events that will run with the dual-conference format.

This event is the second consecutive season NOLA Motorsports Park has played host to the Majors. Weather conditions for this season’s opening day were much more favorable than that of a year ago. Dry conditions, under nearly cloudless skies, were the order of the day. The relatively cool temperatures made for happy engines pushing out as many horses as they could muster.

Here is a summary of the day’s action:

Run Group One: The big-bore group was in the leadoff spot as the day’s racing action got underway. Mike Lewis, of Poway, Calif., scored what could be called an unlikely win in GT-1. Simon Gregg fought his way to the class lead in the opening laps, and was able to comfortably hold the position until a full-course caution was thrown on lap 12. Two laps later, the green flag was displayed for the restart. Gregg led the field into Turn One, but that didn’t last for long.

Lewis streaked into the lead, at the controls of his No. 12 Goodyear/Cyclo/Redline Oil Jaguar XKR, by the time the feild had made it to Turn Four following the restart. At that time, Gregg and Zachary Monette got tangled up allowing Lewis to extend his lead. Lewis then cruised to victory.

Run Group Two: Todd Buras scored what he termed as a come-from-behind win in his No. 056 BSI Racing/East Street Auto Spec Miata. Starting in seventh, Buras knew he would be in the mix toward the end of the 30-minute sprint race. However, he didn’t expect to cross the line in first place when time expired.

Buras narrowly missed being collected in an opening-lap incident that involved multiple cars flying off track. That incident brought out a full-course caution that lasted two laps. Once going back to green, the race was on. Denny Steyn, Chris Haldeman, Andrew Carbonell and Buras were locked in close battle for much of the race. As the laps began to wind down, Steyn was in the lead until he pushed wide through Turn 14. That was enough of an opening to let Buras and Haldeman through as they crossed the line in that order.

Michael Crowe (No. 88 Applied Oxidation Van Diemen F1000), of Jamestown, Kentucky, notched is second win of the Southeastern Conference season in Formula 1000. That allowed him to extend his championship point lead over the rest of the field.

Run Group Four: Spec Racer Ford and their sister Gen3 cars were next up. The Gen3s were the first to take the green in the split start. After eight relatively clean laps, a full course yellow was called after John Waak and Gytisha Strickland tangled in Turn Three. The field circulated four more times behind the pace car until the checkered flag was displayed. Brian Schofield (No. 61 PM Racing SRFG3), of Lakeland, Fla., and Grayson Strathman (No. 1 Monster Energy SRF), of Jennings, Okla., took the wins in SRFGen3 and SRF, respectively.

Run Group Five: The small-bore formula group was the first to complete their entire 30-minute race without a full-course caution. Lewis (No. 12 Redline Oil/Cyclo Vestal 09F) was able to double-dip by taking another overall win after clinching the victory in Formula F.

The closest on-track battle for a class win came in Formula Vee, between Stevan Davis and Donnie Isley. Davis, of Danielsville, Georgia, emerged as the winner, at the controls of his No. 80 Hoosier/Butler Engines/Roxanne’s Headers Racer’s Wedge SB-1, in a fight that was decided by less than 0.5-second. The finish was foreshadowed on the opening lap when the top four drivers approached Turn One side-by-side. However, they were able to get it sorted out before getting to the critical part of the turn and continue on cleanly.

Run Group Six: The production group was the second consecutive race to finish without the need for a full-course caution. Matt Reynolds, of Fair Oaks, Texas, was able to complete 16 unimpeded laps as he drove to victory in E Production at the wheel of his No. 71 Reynolds Bros. Racing/JPM Mazda Miata.

Kevin Ruck, of Atascosa, Texas, also put on a dominating performance in the No. 73 Hoosier/Honda Performance Acura Integra. He was able to outpace the remainder of the F Production field, finishing one lap ahead of second-place finisher Paul Kullman.

Run Group Seven: The final race of the day also finished with little incident from green flag to checkered flag. The B-Spec race was the most intriguing battle of the entire group. JF McClugnau (No. 36 Mazdaspeed/Hoosier Mazda 2), of New Braunfalls, Texas, escaped with the victory, but John Phillips made him work for it.

Phillips was pressing McClugnau up until the last lap. Phillips attempted to get underneath McClugnau through Turns 15 and 16, but was not able to pull off the move. McClugnau got a good exit off the corner and was able to seal his win by 0.176-second.

The second, and final day, of the Majors at NOLA Motorsports Park is slated to start at 8:00 a.m. (CDT), on Sunday. Four 15-minute warm-up sessions will start the day off, while 17-lap feature races will start at 9:40 a.m. (CDT). For additional information on the NOLA Majors, including a schedule, full results and grids, visit SCCA.com/NOLAMajors.