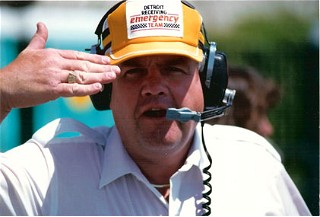 PARKER, Colo. (June 3, 2008)  Former SCCA Vice President of Pro Racing and Vice President of International Racing George Couzens passed away May 31st at the age of 70.In the early 1980s, Couzens was responsible for putting SCCA at the forefront of track safety and was instrumental in the success SCCA enjoyed at temporary street circuits such as Las Vegas, Detroit, Miami and St. Petersburg. In 1988 he was presented with the George Snively Award for outstanding contributions to safety in motorsports.Couzens served as the SCCA Vice President of Pro Racing from 1980 to 1985, when he became the Vice President of International Racing and oversaw SCCAs sanctioning duties for Formula One racing in the U.S. In 1986, Couzens left SCCA to start his own consulting business: Motor Racing Management (MRM), which went on to become the industry leader for the design, construction and safety of temporary street circuits.Couzens is survived by brothers Homer and James, sisters Peggy, Mary, Barbara and Patty, his sons George Jr. Chip, Christopher and Brian, as well grandchildren Lance and Samantha. A private ceremony was held with family and friends. In keeping with the charity work Couzens preformed following his retirement, the family requests contributions be made to Howard Dental Center (1420 Ogden St., Denver, CO 80218) or the Make a Wish Foundation (7951 E. Maplewood Ave., Suite 126, Greenwood Village, CO 80111) in lieu of flowers.