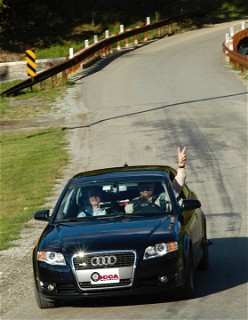 DELMONT, Pa. (October 25, 2007)  Three teams claimed Championships at the 2007 SCCA United States RoadRally Challenge hosted this year by the Steel Cities Region, October 19-21.Each day brought a new rally for the 22 teams divided into three classes: Equipped, for those with any number of on-board navigation gadgets, Limited, for teams using only a restricted set of tools and Stock, for those who used no assistance.On Friday the teams tackled the Laurel Run National Tour Rally, which followed historic US Route 30 and the famed Gravity Hill. The Steel Haul National Course Rally, a challenging trap rally, took place on Saturday. Although the route was the slowest of the event, competitors were kept preoccupied with staying clear of at least one trap per leg. The weekend was capped off with The Ad-dressing of Cats National GTA Rally, an untimed route thats course was determined by the interpretation of contrasting letters on signs.In the Equipped category, Northeast Ohio Regions Jack von Kaenel and New England Regions Jim Friedman were crowned Champions. Although Kevin Poirer and Chris Hale traveled all the way from Oregon and took the Cats Rally, von Kaenel and Friedman won both the Laurel Run and Steel Haul to claim the Championship in an Audi A4.In Limited, Steve Gaddy and Chris Bean, of the Washington D.C. Region, swept all three Rallies in a Subaru Outback to earn the class Championship. Jim Miner, of the Washington D.C. Region, and Clyde Hackler, of the South Jersey Region, took an early lead in the Stock class after winning the Laurel Run in a BMW M3. South Jersey Regions Jim Wakemen and Mark Haas tied things up, winning the Steel Haul in a Saturn Ion. The two teams remained tied after the Cats Rally, but the tiebreaker gave the Championship to Wakemen and Haas.Click here for full results from the 2007 SCCA United States RoadRally Challenge. For more information SCCA Rally click on the Rally tab.