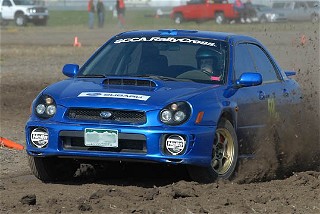 HASTINGS, Neb. (October 29, 2007)  The best RallyCrossers from across the country met in Nebraska this past weekend for the very first SCCA RallyCross National Championship, held this year at Motorsports Park Hastings.Though other year-end RallyCross extravaganzas have been held before, 2007 marked the first year for a National Championship event. A season-long point system and three Inter-Divisional Championships were also developed this year, to keep pace with the growing program. National Champions were crowned based on their finishing position in Hastings, while Inter-Divisional Champions were determined by adding the points earned at the National Championship to each competitors season point total.Rally enthusiasts from the West Coast, East Coast and everywhere in between made the trek to central Nebraska to spend two days playing in the harvested soybean fields adjacent to Motorsports Park Hastingss road course. With the area recovering from some recent heavy rains, the dirt wasnt in prime condition and course maintenance often delayed the schedule, but with some quick responses by event officials and clever fixes by course designers West Pierce and Paul Eklund, the two-day event concluded safely and on time.Rally Stock Front-Wheel Drive and Rear-Wheel Drive were both lessons in domination as Houston Regions Jeff Parker took the RSF field by 17.873 seconds in a Dodge Neon and Jayson Woodruff, all the way from Cal Club, won the RSR National Championship in a Toyota MR2 by 26.360 seconds.Rally Stock All-Wheel Drive was a different story, however. Milwaukee Regions Jeff Armantrout was the day one leader in a Subaru WRX STi, but with only 0.740-second on San Francisco Regions Brent Blakely in another STi. Blakely entered day two with a clear mission and clicked off some lightning quick times, which Armantrout was unable to match until the final two runs. It was too little, too late as Blakely became the first RSA National Champion by 1.696 seconds.Rally Prepared Front-Wheel Drive was another close match-up. Representing the home team, Nebraska Regions Jan Gerber was out to a 6.381-second lead over Cal Clubs Mark Anton after day one. Showing the true grit that makes up RallyCrossers, Anton came out swinging in his Nissan Sentra SER on day two, beating Gerbers Dodge Neon on five of six runs. Despite the pressure, Gerber paced himself and was able to collect the RPF National Championship by 2.292 seconds over Anton.Another game of cat and mouse was played out in Rally Prepared All-Wheel Drive. Lucas Laser, from the Chattanooga Region, built a 5.517-second lead over Utah Regions Karl Sealander in the first day of competition, but Sealanders Mazda 323 GTX was charging hard on day two. Lasers Subaru WRX Wagon got the better of Sealander on two runs, allowing him to maintain the lead and capture the RPA National Championship by 0.550-second.Wichita Regions Matthew Miller took the Rally Prepared Rear-Wheel National Championship in a Nissan.Hal Denham was the day one leader in Rally Modified Two-Wheel Drive by only 0.781-second over Chad Ones, of the Continental Divide Region. Ones Isuzu Imark RS was a rocket ship on day two, faster than Denhams Volkswagen GTI on all but one run. The final tally showed Ones as the RM2 National Champion, 3.862 seconds ahead of Denham, who could still be proud of a hard-fought runner-up finish after traveling all the way from the New England Region.Driving a Subaru Impreza WRX, Eric Genack completed a Colorado Region sweep of the Rally Modified Four-Wheel Drive trophies, finishing 6.542 seconds ahead of Max Johnsons Impreza, and earning the RM4 National Championship.As can be expected with all first-time events, not everything went according to plan for the first RallyCross National Championship, SCCA Rally Manager Pego Mack said. But, thanks to the patience of our competitors and the amazing support of Motorsports Park Hastings owner George Anderson, the event can be called a success. The 2007 RallyCross season was quite an interesting undertaking with the creation of the National Championship, Inter-Divisional Championships and Series Championships. Based on input from the membership, our goal was to produce a program that allowed RallyCross participants to compete on a National level and strive for Championship titles. With what weve learned this year, expect a bigger and better 2008 RallyCross season.Full results will be posted shortly.