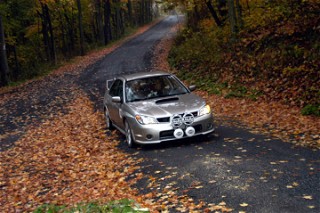 TOPEKA, Kan. (Nov. 14, 2007)  With the 2007 SCCA RoadRally season coming to a close at the U.S. Road Rally Challenge® in October, season-long points have been tabulated to determine this years Manufacturers Champion, Tour Rally Champions, Course Rally Champions and Game Tour Adventure Champions. With 266 cars entered in the 2007 RoadRally season, Subaru proved that all-wheel drive is just as impressive on pavement as on dirt, and accumulated 778 points to win the RoadRally Manufacturers Championship. Ford finished second with 500 points, followed by Chevrolet in third with 406 points.The three RoadRally point series, Tour Rally Series, Course Rally Series and Game Tour Adventure Series (GTA), are divided into four categories based on driver experience, Grand Master being the most experienced, followed by the Expert, Senior and Sportsman Categories. If a competitor enters more than 10 events, only the best 10 finishes are counted toward the year-end score, with 100 points being the maximum a competitor can earn in a season.2007 was the first year that both National and Regional events could be counted towards the Championship points, which resulted in some new names being added to the list of SCCA RoadRally Champions.In the Tour Rally Series, there was four-way tie for the Grand Master Championship. Bruce Gezon, of Murrysville, Pa., Dave Jameson, of Tuscon, Ariz., Fred Mapplebeck, of Salem, N.H., and Jack von Kaenel, of Arlington, Va., each scored 100 points and will share the Grand Master Crown.Steve Gaddy, of Grand Forks, N.D., wins the Expert Category Championship in the Tour Rally Series with 90 points, while Steve Novatne, of Bethlehem, Pa., wins the Senior Category, collecting 88 points. Recently crowned RallyCross Inter-Divisional Champion Paul Eklund, of Tigard, Ore., adds another Championship to his 2007 tally by taking the Sportsman Category with 92 points.There was another tie for the Grand Master Championship in the Course Rally Series. Jim Friedman, of Silver Spring, Md., Bob Morseburg, of Seattle, Wash., and Tour Rally Champion von Kaenel all earned the maximum 100 points this season to share the title.In addition to the Expert Category Championship in the Rally Tour Series, Gaddy earned the Expert Championship in the Rally Course Series as well, earning 100 points.Mark Haas, of Ardsley, Pa., and Jim Wakemen Sr., of Turnersville, N.J., tied for the Senior Category Championship in the Course Rally Series, collecting 84 points each, while Jeff Wakemen earned the Sportsman title with 83 points.The Grand Master Championship in the GTA Series was awarded to J Toney, of Woodland, Calif., who earned 29.50 points.Collecting 38 points in GTA Series and another Expert Category title, Gaddy swept all three RoadRally Championships.Chris Bean, of Millersivlle, Md., earned the Senior Championship with perfect scores in all four events he entered for a total of 40 points. Teaming up for seven events, husband and wife Catherine and Mark LaCroix, of Grapevine, Texas, tied for the Sportsman Championship with 59 points each.