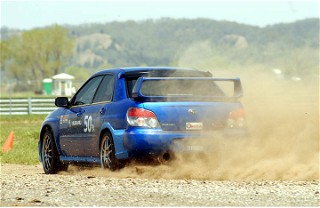 PACIFIC JUNCTION, Iowa (May 9, 2008) - The third SCCA RallyCross National Challenge event of the year is now in the books after a successful event at Mid-America Motorplex, hosted by the Nebraska Region on May 4.Large classes often equate to close finishes, that is unless Christy Carlson is running. Entered in Prepared All-Wheel Drive, which tied Modified Four-Wheel Drive and Stock All-Wheel Driver for most entries, Carlson won in a Subaru STi by more than a minute over second place John Sulaski in a Subaru WRX wagon. Looks like Carlson will be the one doing the teaching when she attends a Team ONeil Rally School this summer, which she won at last years RallyCross National Championships. SA and M4 did produce some tight finishes however, the closest of the event in fact. Jon Simmons piloted a Subaru Legacy GT to the SA victory by 23.85 seconds over teammate Chris Olsen. M4 was closer still, where Ken Cashion eked out a 15.39-second win in a Mitsubishi RS over Max Johnsons Subaru Impreza 22b. Neons were the name of the game in Stock Front-Wheel Drive and Modified Two-Wheel Drive. Jan Gerber shared a Plymouth Neon with Sarah Gutekunst in SF and beat his teammate by 55.55 seconds. James Phillips and Chris Lionberger shared a Dodge Neon in M2, with Phillips taking the win by 51.32 seconds.Driving a Mazda Miata, James Wood took on the BMW 325 of Kris Martison in Stock Rear-Wheel drive and won by a nearly a minute.In Prepared Rear-Wheel Drive, Mark Atterbury had Chuck Garcias Ford F250 covered. Atterbury took the win by more than two minutes in an Alfa Romeo GTV 6. Despite being the sole Prepared Front-Wheel Driver entrant, Scott Embury didnt leave anything on the table in his Saturn SL2, as evidenced by his decreasing cone penalties and increasing speed throughout his runs.For full results from MAM and information on the next RallyCross National Challenge event, May 17 at Johnson Valley OHV Park, in Lucerne Valley, Calif., click the green Rally tab at the top of the page.-30-