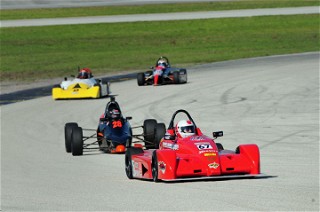 HOMESTEAD, Fla. (January 10, 2015) – Round One of the Southeastern Conference SCCA U.S. Majors Tour at Homestead-Miami Speedway is history. While Championships cannot be won during the opening round of competition, it can certainly shape and lend some insight onto the character of the remaining season. If there is one takeaway, 2015 should be quite a season as the determination of each competitor to win is already at fever pitch.

Seven race groups took to the 12-turn, 2.3-mile road/oval circuit to start the path to the Runoffs. This weekend’s two-day event marks the first time the Miami-area speedway has hosted a Majors event. The premiere talent and skill of this crop of drivers showed as lap records fell in nearly every class. Conditions for the record-setting day could not have been better as the morning haze burned off, resulting in the sun breaking through the clouds.

Here is what happened:

Run Group One: As the opening act to the entire 2015 Majors season, Spec Miata did not disappoint. Close, fender-to-fender racing was the name of the game, and Elivan Goulart, of Shelton, Connecticut, was able to pull off the narrow win, in his No. 70 SAC Racing Services Mazda Miata, with a last-lap pass on Todd Buras.

A total of 42 drivers took the green, led by hometown driver Alex Bolanos. Bolanos took part in a close-quarters, four-car battle for the lead that included Buras, Denny Steyn and Selin Rollan. Goulart had missed a shift earlier in the race dropping him back to sixth place. As the laps wound down, the leaders started to fight hard amongst themselves giving Goulart the opportunity to reel them in. He did just that, and was able to get the draft to work for him on the banking of Turns 11 and 12 which allowed him to make the outside pass stick for the win.

Charles Hearn, of Houston, eked out a narrow 0.011-second win in his No. 37 Noble Racing Vortech Formula Vee over Russell Fredericks. In fact, the racing was so close that third place Laura Hayes was only 0.043 seconds behind Hearn at the finish.

Run Group Three: The big-bore group was slowed by two lengthy full-course yellow flags, resulting in over half the 14-lap race being run behind the pace car. Simon Gregg, of Ponte Verde Beach, Florida, received the checkered flag in his GT-1-classed Derhaag Motorsports Chevrolet Corvette. En route to his win, Gregg bested the track record with a lap of 1:18.874 (104.978 mph).

The on-track carnage left many cars damaged, including that of Juan Vento and Joe Aquilante who were involved in two separate incidents. Even Gregg, who led the race after taking first away from Doug Peterson on the approach to Turn One after seeing the initial green flag, was affected when his right rear tire began to go flat as he drove the final four laps of the race at reduced speed. Gregg said the race ended right before the tire would have started to tear itself apart.

Run Group Four: Kerry Jacobsen, of Deland, Florida, made history by becoming the first driver to score a victory in the newly Runoffs-eligible Spec Racer Ford Gen3 class. Driving a near-flawless race at the controls of his No. 38 Zulu Properties LLC SRFGen3, Jacobsen cruised to victory by a margin of 1.659 seconds. However, it was Cliff White that nabbed the initial track record of 1:33.391 (88.660 mph) around the 12-turn, 2.3-mile circuit.

Multi-time National Champion Scott Rettich, of Columbus, Ohio, showed why he owns multiple gold medals from the Runoffs. Racing in the traditional Spec Racer Ford class, Rettich pushed his No. 17 Alliance Autosport SRF to an 11-second lead over Schofield by the time he crossed the finish line.

Run Group Five: Preston Calvert, of Potomac, Md., began his Eastern Conference and Nation-wide title defense with a win in Touring 2. Calvert was embroiled in a give-and-take battle with Gary Mason, for the race group lead. Calvert said his No. 77 Phoenix Performance Ford Mustang could pull away from Mason on the long straights, but that Mason, in his Porsche 996/911, would reel him back in through the tight sections of the course. However, Calvert showed patience and outlasted Mason to the end of the race.

Nick Leverone, of Greenwich, N.Y., took the win in Super Touring Lite, and set a new lap record of 1:35.869 behind the wheel of the No. 3 Drillmasters Mazda Miata. He beat Mike Van Steenburg to the line by a 1.411-second margin.

Run Group Six: Sometimes it is better to be lucky that good. According to Kip Vansteenburg, of New Smyrna Beach, Fla., that was true for him. Driving the No. 4 German Excellence Porsche 944S2, Vansteenburg said 2013 National Champion Greg Ira had the field covered for the win had not been for a mechanical failure that forced an early retirement on lap 14. Ira led weight to that statement by having set the E Production record with a fast lap of 1:30.210. Instead Vansteenburg was able to capture the Majors win for himself.

Peter Shadowen, of Loxahatchee, Fla., also considered himself lucky. The transmission of his GT-Lite-classed No 72 Road N’ Race Automotive Honda CRX Si was stuck in third gear for an entire lap at the beginning of the race. While still circulating the course, Shadowen got his transmission out of third allowing him to shift properly. Later in the 20-minute race, a brief shower fell but only affected the front straight. The moisture on track slowed the overall pace of the race, but Shadowen was able to hold his first-place position to take the win.

Run Group Seven: Mark Schneider, of Pembroke Pines, Fla., put his No. 66 Wildman Motorsports Van Diemen Formula Enterprise in the right place at the right time, and was able to keep it there until the checkered flag fell allowing him the class win. It wasn’t that easy though as he was under pressure from Thomas Green for most of the race, crossing the finish line with only a 0.297-second gap.

On Sunday, action resumes with seven 20-lap feature races from Homestead-Miami Speedway. Cars hit the track for Round Two of 12 in the Southeastern Conference at 8:20 a.m. (EST).