The Chase for the Southeastern Conference Title is Officially On 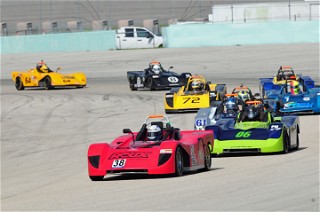 HOMESTEAD, Fla. (January 11, 2015) – Round Two of 12 for the SCCA U.S. Majors Tour Southeastern Conference wrapped up on Sunday from Homestead-Miami Speedway.

Light on-and-off showers with plenty of Florida sunshine were the order of the day for at the 2.3-mile, 12-turn road/oval course just south of Miami. The first three race groups each had to deal with the precipitation which did little to affect the grip levels of the racing surface. In many cases, the sprinkling rain was just enough to temporarily obscure the drivers’ vision.

Here is what happened:

Run Group One: Again, Spec Miata produced a barn-burner of a finish. Todd Buras, crossed the finish line just 0.041-second ahead of Danny Steyn, followed by Selin Rollan. However, the Rollan (No. 87 Apex Alignment Mazda Miata), of Miami, Fla., was awarded the win after Buras and Steyn were sento the the rear of the finishing orders for a non-compliant engine.

Run Group Two: Donnie Isley, of Fletcher, N.C., took the win in another close Formula Vee race. Driving his No. 30 Digital Intelligence Agitator 016, Isley relied on strategy to cross the line first. During Saturday’s race Isley learned the importance of the draft on the high-banked final turns. As he was in the lead on the final lap of Sunday’s race, Isley slightly let up on the gas between Turns 11 and 12. That caused the pack of three cars behind him to stack up, which was enough to upset the draft allowing Isley to win the drag race to the finish line.

John Robinson II, of St. Cloud, Fla., piloted his No. 19 Lee Racing Swift DB6 to victory in Formula F. Unable to complete the full race distance on Saturday, Robinson bounced back on Sunday to beat out John Benson and open-wheel professional Tonis Kasemets who completed the podium in that order. Kasemets made the trip down to Miami from Daytona where he took part in the official pre-season test for the Rolex 24.

Run Group Three: The ground-pounding cars finished one lap early, under the double-yellow flag. Andrew Aquilante, of Chester Springs, Pa., completed the weekend sweep in Touring 1 while driving his No. 36 Phoenix Performance Chevrolet Corvette. Aquilante said he was able to get the early jump on the rest of the field following the split start, which was a change from Saturday’s race. From there, he cruised to take the win behind the pace car.

Run Group Four: The Spec Racer Ford Gen3 class provided one of the closest finishes we have seen this race weekend. Kerry Jacobsen, of Deland Fla., finished the 20-lap race a half-fender length ahead of James Goughary. The win is Jacobsen’s second this weekend behind the wheel of his No. 38 Zulu Properties SRF Gen3, setting him up well for the remaining Championship fight.

Scott Rettich, of Columbus, Ohio, also performed the double this weekend in his No. 17 Alliance Autosport Spec Racer Ford. Rettich was able to get a good start and began to pull away from the rest of the field. Throughout the remaining 20 laps he worked on stretching his lead over Derek Schofield, and the rest of the SRF field.

The remaining three winners, Nick Leverone (Super Touring Lite, No. 3 Drillmasters Mazda Miata), of Greenwich, N.Y.; John Heinricy (B-Spec, No. 35 Matick Chevrolet/Hoosier Chevrolet Sonic), of Clarkston, Mich., and Tim Myers (Touring 4, No. 22 BFGoodrich Tires/Liaison/Carbotech Mazda RX-8), of Atlanta, Ga., were not challenged much throughout the race but had to keep their foot in the gas to maintain their lead. For these drivers, their widest margin of victory was just over five seconds.

Run Group Six: Sam Moore’s H Production win was the only race decided by less than one second, as he doubled up during the Homestead Majors weekend. Moore, of Kannapolis, N.C., drove his No. 21 Hoosier/HPD Honda Civic Si to a 0.215-second win over W. Griffin.

Run Group Seven: By his account, Conner Kearby, of Corpus Christi, Texas, had a great opening weekend of 2015. He brought the No. 56 GK Motorsports/K-Hill Motorsports Swift 016 home with a pair of little-contested wins in the event.

Gianpaolo Ciancimino, of South Florida, Fla., took home the Sunday win in Prototype 1. He drove his No. 99 Stohr WF1 to a 0.907-second victory over Jacek Mucha. Ciancimino said he really enjoyed the weekend and had fun racing at a track he likes so much.

Up next for the Southeast Conference is a visit to Sebring International Raceway for Rounds Three and Four of the Championship campaign. Qualifying is slated to start on Friday, Jan. 16.