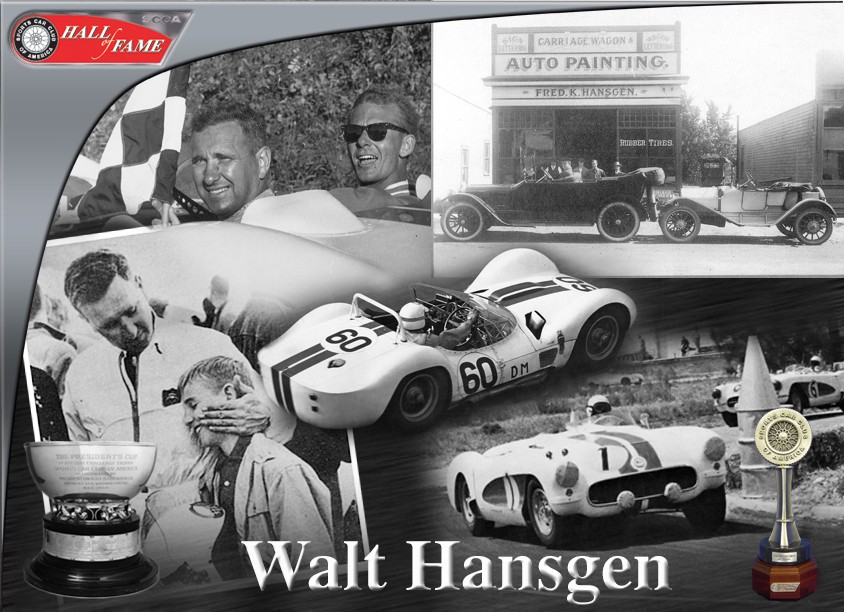 Walt Hansgen didn’t begin his motorsports career until 1951, when he was 31 years old. He tragically passed away just 15 years later in a testing accident. But those 15 years were magical.

Like so many, a friend brought Mr. Hansgen, then working at his family’s body shop in New Jersey, to his first SCCA event. He was hooked.

He developed the Hangen Special and drove it to his first SCCA National win in 1953.

For the next many years Walt continued his winning ways in SCCA, driving his cars and those of others, as well as developing a reputation on the international racing circuit.  He was the SCCA National Champion in C Modified for four consecutive years from 1956-1959. In 1957, he was awarded the President’s Cup for the first of three times, adding ones in 1958 and 1961. In 1957, Mr. Hansgen was named “The Best Driver of the Year” by the New York Times, and Sports Illustrated named him “U.S. Sports Car Driver of the Year.”

Already a regular at Sebring and Daytona, Mr. Hansgen ran Le Mans for the first time in 1959. By the early 60s, he had sprinkled in the US Grand Prix, the Mexican Grand Prix, and a handful of Indy 500 starts, as well as the SCCA Pro Racing USRRC.

Off the track, Mr. Hansgen was a strong contributor. He helped found the Road Race Driver’s Club, and served as President for four terms. He was a track safety inspector for SCCA, and developed curriculum for teaching new drivers. He served on the National competition board while still an active racer.

At the time of his death, President and SCCA Hall of Famer John Bishop said that “Racing has lost its best friend.  I don’t know of anyone so well liked and respected by other drivers. Walt was never too busy to stop and help them.”

A tribute written at the time of his death said that “SCCA competitors probably will never appreciate how great a contribution Walt made towards improving the club’s racing program, safety standards, and competition rules during his four years on the club’s Competition Board.”