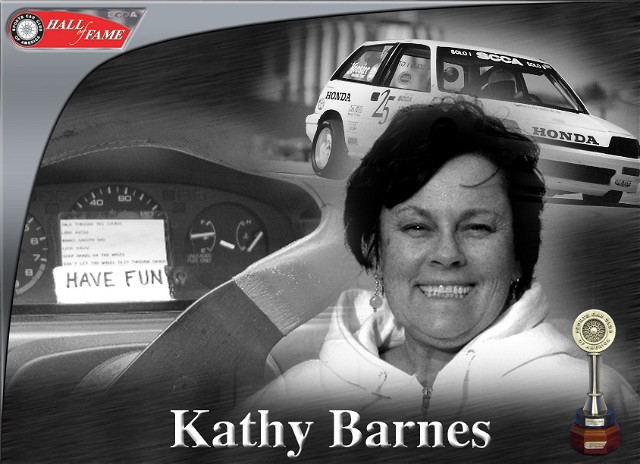 Most people in SCCA who have distinguished themselves have had very intense focus on one area, or on one category of areas. Kathy Barnes has jumped into everything she’s done with both feet, including Solo, Race, and Club administration. The membership has known and worked with Kathy for over 40 years, in various venues. Her goals have always been to make SCCA better and stronger, to insure everyone understands and respects the rules that govern us, and to make sure we all have the opportunity to have fun.

Chair of the Solo Events Board: She encouraged members to communicate with the SEB as much and as often as possible. Indeed, during her tenure communication with the SEB became more frequent and more valuable during that time.

Multi-time Chair of the Solo Nationals event: Consistently overcame the enormous challenges always presented by such a massive event, and always with an eye toward providing significant improvements for competitors as a whole. The ongoing ability of the event to offer competitors a quality experience is largely due to her efforts.

Chief of Workers for the Solo Nationals (herding the cats comprising the 1100- plus person staff of driver/workers). For those who may not be familiar with the nuances of this, every worker at the Nationals is also a competitor, with very different time and focus demands for each role. It was known as the job nobody wanted, and Kathy was willing to do it multiple times and has made it easier for all of those who followed.

Chair of the Solo Safety Committee:

Kathy’s award recognitions include the following:

Kathy has also long been an advocate of attracting young people to SCCA, and was at the forefront in the development and acceptance of the Solo program’s Formula Junior program for drivers under 16. She also strongly supported the development of the Street Touring and Street Modified categories, which were designed to appeal to the young “tuner” crowd and have been valuable for helping keep SCCA relevant in the evolving auto enthusiast marketplace. She consistently involves herself in activities at all levels which reach out to younger individuals and get them involved in SCCA, mentoring them both as competitors and as volunteers.

As a competitor, she has been a Solo National Champion 5 times, and now takes just as much joy in watching the younger generation achieve that goal as she ever did in doing well for herself.

In summary, Kathy has had impacts throughout the Club, from the organization and administration of events at the highest levels, to the difficult processes of making and enforcing rules, to the essential attraction of young people into SCCA. Her accomplishments are certainly worthy of induction into our Hall of Fame.