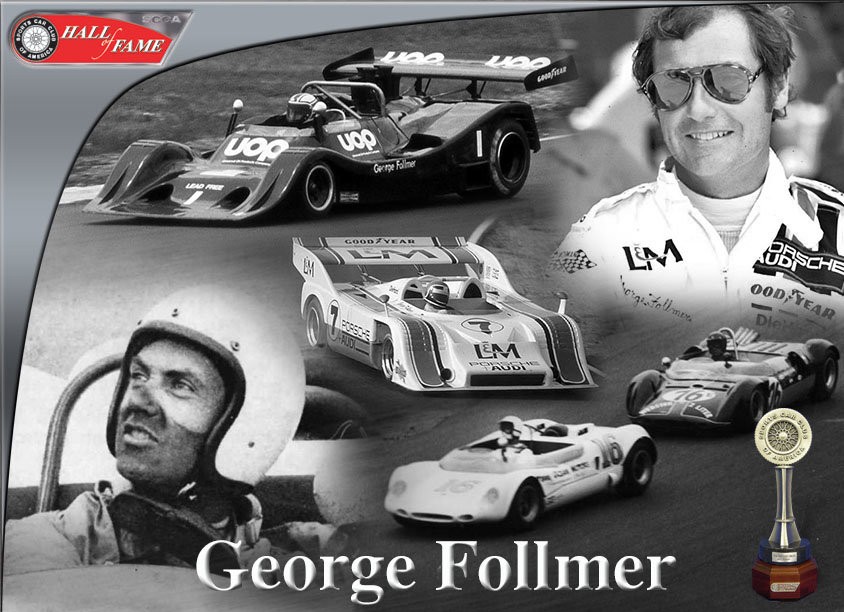 Everything that George Follmer ever did, he did with a trademark intensity. Though slightly overlooked and underrated by the public when compared to his contemporaries, Follmer’s racing resume stacks up against anyone that has ever worn a helmet. His list of accomplishments is, quite simply, legendary.

His career started as the Cal Club Rookie of the Year in 1960. In 1965, Follmer won the USRRC in a Porsche-powered Lotus, competing against the great Jim Hall in his Chapparal. He won SCCA’s Contintental Championship in Formula A in 1970, and also won two Formula 5000 races in that same season. In 1972, Follmer put together what is one of the greatest seasons in racing history. He won four Trans-Am races in an AMC Javelin to take the title in that series, and won five races in Can-Am to win the Championship in the Penske Racing Porsche 917. Filling in for the injured Mark Donohue, that was the season that earned Follmer the reputation of Penske’s “Super Sub”. He was the only driver to ever win both Championships in a single year. His 1972 season led to his Formula 1 debut as a 39-year-old rookie. There, of course, he scored a point in his very first Grand Prix, and later that season a podium. In typical fashion for Follmer, he wasn’t only racing in Formula One. He also finished second in Can-Am that season, and again in 1974. He won his second Trans-Am Championship in 1976.

Along the way, outside of SCCA, Follmer traveled the world racing cars. He was a contender in Formula One and NASCAR. He won races in IROC, the 12 hours of Sebring, and was a podium finisher at the 24 hours of Daytona. He remains the only driver to win an IndyCar race with a stock block motor. Several years after his retirement, he returned to racing to finish third at Le Mans in a Porsche, like he’d never missed a beat.

In 1999, he was inducted into the Motorsports Hall of Fame. No less than Parnelli Jones called George Follmer one of the best he’s ever raced against. The book by Tom Madigan is called Follmer: the American Wheel Man, and nothing could be more accurate.