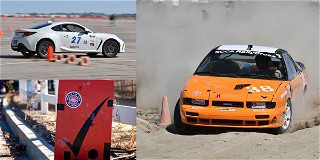 Some of the most prestigious awards in Solo, RallyCross, and RoadRally will be presented at 5 p.m. CST on Jan. 24 during the 2023 virtual SCCA National Convention. While the winners of these awards are listed below, SCCA members are encouraged to login to the SCCA RoadRally, RallyCross, and Solo Annual Awards session during the 2023 virtual SCCA National Convention, where the official presentations will be made.

Entering a field of 48 STX drivers during his rookie year at the 2022 Tire Rack SCCA Solo National Championships and besting 43 of them, the Solo Rookie of the Year award is presented to Houston Region’s Kevin Brewer.

Driver of the Year
The Solo Driver of the Year will have demonstrated exceptional skill or overcome major obstacles to produce an outstanding performance at the prior year’s Tire Rack SCCA Solo National Championships. The winner is selected by the Solo Events Board from nominations submitted by the membership at large.

Dirty Cup
Presented annually to recognize an individual who has made an extraordinary contribution to the sport of SCCA RallyCross, this award recognizes contributions over time, made as a competitor, organizer, worker, administrator, or similar. The winner's contribution shall have had a positive impact on the program nationwide.

This year’s Dirty Cup goes to Keith Lightfoot from the Colorado Region. Lightfoot has been an integral part of the RallyCross program both within Colorado and Nationally for years, having served on the RallyCross Board until 2019, chairing the National Championship Committee, and helping out wherever he has been needed. This was especially the case with the 2022 RallyCross National Championship, which was hosted in his home Region and for which he tirelessly worked wearing many hats.

Spark Plug Award
Recognizing an outstanding effort in promoting and publicizing SCCA RallyCross using multimedia to further the recognition and growth of RallyCross, this award can be earned by an individual, a Region, or an entire Division.

Berrington, a previous recipient of this award in 2014, is a leading motorsports photographer and avid RallyCross driver. Olschewski, a recipient of the Dirty Cup in 2020, has been involved in all levels of the sport since its inception and has been deemed “The Voice of RallyCross” for 16 years thanks to his service as a popular announcer during National events. For the 2022 RallyCross National Championship, Berrington and Olschewski combined their talents to elevate the media coverage to entirely new levels, including crowd-sourcing the funds needed for drone coverage and live streaming feeds of the action – both firsts for the RallyCross National Championship.

Regional RallyCross Achievement: New England Region
Hosting one of the oldest and largest RallyCross programs in the country, New England Region continued its tradition of hosting quality events at multiple sites and sending numerous fast drivers to the 2022 RallyCross National Championship with the support of their unique tow fund. New England Region members also serve at all levels of RallyCross leadership, as well as help represent the rally division in other Club programs such as the Women on Track committee.

David Teter Touring Rally of the Year
W. David Teter was the editor of the modernized and comprehensive RoadRally Rule Book, Rallymaster of 17 consecutive March Lamb Regional rallies, and an outstanding competitor on the National Tour rally circuit. This award is presented annually in recognition of the outstanding National Tour Rally from the previous year. The selection is made by vote of the top 20 competitors in each class who have competed in at least three National Tour rallies that year.

The David Teter Touring Rally of the Year award goes to Great Canyon by the Arizona Border Region, with Karl Broberg as Rallymaster.

Arthur J. Gervais Course Rally of the Year
Arthur J. Gervais was a longtime Rallymaster of the Historic New York National RoadRally, with this award being presented annually in recognition of the previous year’s outstanding National Course Rally. The selection is made by vote of the top 20 competitors in each class who have competed in at least three National Course rallies that year.

This year’s Arthur J. Gervais Course Rally of the Year goes to Desert Sands by the Arizona Border Region, with John Sears and Karl Broberg as Rallymasters.

Robert V. Ridges Memorial Award
Robert V. Ridges was Secretary of the RoadRally Board (RRB) from the inception of the National program in 1957 until his passing in 1965. This award is presented to the SCCA member who exemplifies the highest degree of dedication and sportsmanship during the preceding year, making an outstanding contribution to the success of an event during its execution; who has made an outstanding contribution to the program as a whole; who has exhibited exceptional sportsmanship involving personal sacrifice; or who has undertaken physical risk for the preservation of life or property.

This award is not intended for sitting RRB members, official observers, Rallymasters, or officials unless they have clearly demonstrated extraordinary dedication, achievement, and/or sportsmanship above and beyond the duties and responsibilities of their office. Contestants shall only be eligible in cases involving exceptional sportsmanship, personal sacrifice, or risk. The recipient is selected by the RRB based on recommendations of any rally participant or Board member. An individual may only receive this award once. This is the highest honor within the SCCA RoadRally Program.

Best New Regional RoadRally Program Award
Presented in recognition of a Region’s development of a new RoadRally/Trek program as demonstrated by organizing events for two consecutive years, or two or more events in one year, and establishing an independent program by having a licensed RoadRally Safety Steward within the Region’s membership. The recipient is selected by the RRB based on recommendations from any SCCA or RRB member.

Divisional RoadRally Achievement Award
Initiated in 1992, this award is presented in recognition of a Division’s activities in RoadRally for a new or on-going program. This may include events, promotions, attendance, innovation in public relations, etc. Nominations clearly indicating the qualifying details may be made by any rally participant, with the recipient being selected by the RRB.

Regional RoadRally Achievement Award
Presented in recognition of a Region’s activities in RoadRally for a new or on-going program. This may include events, promotions, attendance, innovation in public relations, event participation, etc. Nominations clearly indicating the qualifying details may be made by any rally participant, with the recipient being selected by the RRB.