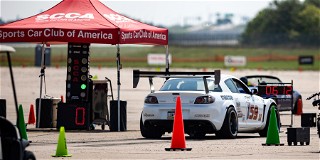 The 2023 ProSolo season is staged and ready to go, with the first event slated to take place Feb. 24-26 at Naval Air Station Chase Field in Beeville, TX. Before competitors take the green light, however, they should review the updated ProSolo Rules.

Brian Mason, SCCA’s National Solo Series Manager, said the seven-member ProSolo Index Committee proposed the changes, which go into effect immediately. Some changes reflect incorporation of new classes as ProSolo continues to seek balanced distribution within the Street Index category. Other changes were made possible due to equipment and efficiency improvements made within the Solo program.

“One of the biggest changes for 2023 is how Super Challenges will be conducted,” Mason said. “Ladies Challenges and Bonus Challenges will be performed in the same way as previous years. The Super Challenge, however, will take the top 32 drivers and split them into two groups. From there, three elimination rounds will be held to determine a single winner. It’s a system that will be tested in the coming weeks, but should make things pretty exciting.”

Links to the 2023 ProSolo Rules, as well as the ProSolo class and PSI updates summary document, can be found below.

For those with a SuperPass, the registration window has already opened for the Tire Rack South Texas ProSolo. Those without a SuperPass can begin registering for the event starting at 3 p.m. Central Time on Wednesday, Jan. 18, 2023.

Don’t miss out on the first ProSolo of the year. Reserve your spot ASAP!