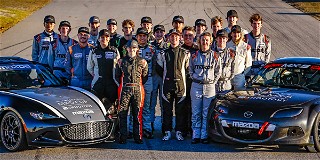 Each year, Mazda Motorsports invites numerous drivers to compete for coveted scholarships within the Mazda MX-5 Cup and Mazda Spec MX-5 series. Considering the Mazda MX-5 Cup has jumpstarted numerous professional racing careers, with the Mazda Spec MX-5 series also proving to be a successful launching board, these opportunities are taken seriously. The most recent Mazda shootout took place in the closing weeks of 2022, with several SCCA members contesting for the prizes. In the end, of the five racers earning top honors, three held active SCCA memberships.

Chicago Region member Nate Cicero has been racing Super Touring Lite and Spec Miata with SCCA since mid-2022. He was the grand-prize winner during the latest Mazda MX-5 Cup Shootout, earning a prize valued at $110,000 to compete in the 2023 Idemitsu Mazda MX-5 Cup presented by BFGoodrich Tires.

The Spec MX-5 Shootout consisted of nine karters looking to transition into cars. There, Chase Jones and Reid Sweeny were chosen to become Mazda club racing factory drivers in the series. At just 16-years old, Sweeny has been a member of SCCA’s St. Louis Region since 2019.

Learn more about the shootouts and these winners at mazdamotorsports.com.