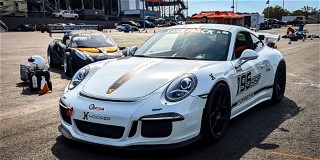 Smooth with a fantastically grippy asphalt surface makes the zMAX Dragway site in Concord, NC, a popular one. Add in a Central Carolinas Region-hosted barbecue and the SCCA autocross-famous “trasharita,” and the weekend’s atmosphere was a grand one.

If you thought that having the Solo Nationals in the rear view would mean the competition would be any less fierce, you should think again.

In E Street, Timothy Maxey and George Schmitt ran the same time to the same tenth on both days, but Maxey was fractions ahead in each. Schmitt pushed hard during his last run but couldn’t make up the scant 0.052 sec that was the final margin of victory in the class, with the win going to Maxey.

The Street Touring Xtreme crown was an intramural battle in Jonathan Mudge’s Scion FR-S, with the car owner and Mike Casino going head-to-head. Casino closed the gap on Sunday by posting the best run, but Mudge topped the overall chart to claim the class win.

C Street Prepared saw the lead swap, closely and quickly. Jeff Schmidt opened Saturday with the lead, but Ian Baker charged back on Sunday to take the class title by 0.038 sec with a quicker Sunday run. Adding to the excitement, Kevin Henry ran the quickest time of the day in class on Sunday, but finished 3.75 sec behind the leader after standing on a double cone run and corresponding four-second penalty on Saturday, keeping him out of the Sunday battle.

There were numerous other fantastically close battles and a few runaway wins. For more on those, check out the SoloMatters Facebook page, as well as Charlotte National Tour’s complete results.

Ain’t Over ‘till It’s Over

In addition to the stand-alone individual autocross competition – it is Solo, after all – this event features a team competition of sorts, featuring the Allied makes (think U.S. and British cars) against the Axis cars (Germany and Japan). Driving a Ferrari? You’ll start on the Allies and move over to the Axis after lunch. Drive a Volvo? You can stay to the side and just sell parts to each team? Have a Peugeot? We’re not sure! Strangely, the French have never shown up to this thing.

This event is the Dixie Region’s way of having fun during a “slow” part of the season, that has become a Solo National Tour event. How do the team points work? Eh, it’s probably enough to say that the Allies hold a perfect 34-0 record in this event’s history.

The Allies vs Axis event is held annually on the weekend closest to Pearl Harbor Day (oh, there’s the tie-in!), which this year is Dec. 2-4. Don’t miss it – we promise you’ll have fun!