FTD to Top Pax and Beyond: More Solo Awards 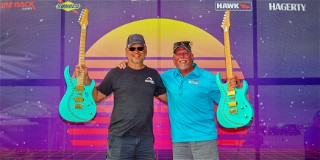 The 2022 Tire Rack SCCA Solo National Championships has concluded, but the recognition most certainly has not for those who had a fruitful week at Lincoln Airpark during the Sept. 6-9 event – and we’re not only talking about those who won their class.

While many of the outstanding prizes were presented at Wednesday night’s banquet during Solo Nats (namely the Solo Cup, Driver of Eminence, Johnson Spirit of the Sport Award, and Dick Berger Perseverance Award), there were a handful of other awards that deserve extra attention, like the Rothney-Kozlak Cup, Keisel Guitars Top PAX Award, and more.

At the 1994 Solo National Championships, Lynne Rothney-Kozlak took a leap of faith and entered into Open class competition – something that wasn’t often done at the time. The Rothney-Kozlak Cup was established in 2017 to recognize this moment, and to note Lynne’s decades of sustained Open class participation and mentoring efforts to advance the skills of other women in Solo.

This award is presented annually to the top finishing female driver participating in an Open class at the Solo National Championships. The recipient either has the widest margin of victory in an Open class or is closest to the Open class winner regardless of where she placed. The award was won for three consecutive years from 2017-’19 by Tamra (Hunt) Krystinik (rendering her ineligible for the Rothney-Kozlak Cup in the future), and in 2021 the honor went to Kim Whitener.

This year, the Rothney-Kozlak Cup was presented to Kate Fisher. Entered in the extremely talented Street Touring Xtreme class, Fisher finished 16th in the 48-driver class, just 2.098 seconds out of the lead.

There is something to be said for posting the flat-out fastest combined time of the week and picking up the Small Fortune Racing FTD Award (yes, we still refer to that as the “Fastest Time of the Day,” even though the Solo Nationals is a pair of two-day efforts). There’s even more to be said for doing it two years in a row, as Matthew Ellam did in his B Modified Omnifab Cheetah. Ellam posted a combined score of 106.728 seconds (and drove more than 1,400 miles from Minden, NV, to spend less time on course than anyone else at the event).

Not every car has the chance to go the quickest on outright speed, but the SCCA Solo’s PAX Index balances those times based on potential. Keisel Guitars recognizes the top PAX performers in each period (Tuesday/Wednesday and Thursday/Friday runners) with one of the coolest trophies in motorsports: a custom-built Keisel Guitar. This year, those guitars went to Robert Lewis and Patrick Washburn, who topped PAX in each session from their seats in C Prepared and E Prepared, respectively, and finished 1-2 overall.

The top Ladies class drivers based on Index were also recognized. Annie Gill, the champ in the Street Touring Roadster Ladies class, and Nicole Wong, the titlist in Super Street Prepared Ladies, were best overall on their respective run dates.

The Masters Index goes to veteran drivers who are age 62 or older, based on times determined by the PAX Index. Tommy Pulliam and Monty Pack took home this year’s award for their efforts in C Prepared and Super Street, respectively.

The Formula SAE program is a supplemental class, but gives college students who work hard at their programs an opportunity to test their pure speed against other colleges. The final piece of that puzzle is a capable driver, and the Bob Woods Award recognizes the quickest college student in the class.

This year’s Bob Woods Award went to class winner and second-generation SCCA driver Kencey Christopher, driving for the University of Texas at Arlington and their decorated Formula SAE program.