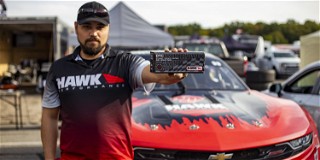 Thursday is Tire Rack Pole Day, the final day of qualifying for the 59th SCCA National Championship Runoffs at VIRginia International Raceway (VIR). But before the excitement reaches a fevered pitch, let’s recognize those who earned Hawk “Brake-Through” Performer accolades from Wednesday.

For a third year, Hawk Performance -- Official Brake Products of SCCA since 2003 – presented Hawk “Brake-Through” Performer honors to the one driver in each of 26 car classes who showed the most improvement in qualifying position from Tuesday to Wednesday during the Runoffs. The “most improved” in a class has earned a set of Hawk brake pads for their racecar, tow rig or street car. Those named in the list below must report to the contingency desk, found in the tech shed, to receive their official Hawk “Brake-Through” Performer winner’s certificate and instructions on redeeming the prize.

For over 25 years, championship winning drivers and teams have demanded Hawk Performance motorsport brake pads. The company leverages its experience on the track, and technology used in aerospace and the military, to make first-class products in the USA.

Hawk’s advanced technology is also available for daily cars, trucks and SUVs thanks to Hawk Performance street products. With the LTS compound for SUVs and Jeeps, Super-Duty pads for tow vehicles, and brake fluids for both the street and the racetrack, Hawk has every braking need covered. Learn more by visiting HawkPerformance.com, and don’t forget to give Hawk a “like” on Facebook and Instagram.

Hawk also helped out Wednesday afternoon by sponsoring the volunteer lunch for hundreds of SCCA members at VIR who make the Runoffs happen, showing just how committed Hawk is to supporting Sports Car Club of America and the National Championship Runoffs.

Without further ado, the following list contains Hawk “Break-Through” Performers from Wednesday. Each entry includes the car class, driver’s name, hometown, SCCA Region, car make/model, and the number of grid positions gained from Tuesday to Wednesday. In case of a tie, the award goes to the driver further up the grid. And if all else failed, the winner was drawn at random.

No ”Brake” in the Action

To better soak up all the Runoffs have to offer, why not be at VIR in person! Spectator tickets start at only $20 per person. Those who are SCCA members can get a 20 percent discount on tickets by logging in to their membership account portal at SCCA.com. And Hagerty Drivers Club members can get 20 percent off admission by snatching up tickets here.

For those who simply can’t make it to VIR in Alton, VA, it’s possible to enjoy Hagerty Race Days – which are Friday, Saturday, Sunday – with multi-camera video coverage presented by Mazda through a live broadcast online at SCCA.com. That presentation can also be accessed through SCCA’s official social media channels at YouTube or Facebook, and features the voices of Greg Creamer, John Fippin, MacLeod and O’Gorman, with Heyward Wagner covering pit lane once again.

Additional information – including qualifying/race results, event schedule, and facility map -- can be accessed online through the VIR Runoffs Event Guide.