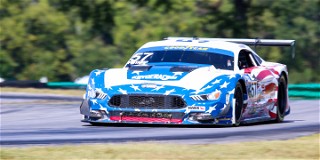 Two days of qualifying have come to close, which means there’s only one left – that being tomorrow’s Tire Rack Pole Day. By Thursday evening, grids will be set and polesitters named for three days of competition at the 59th SCCA National Championship Runoffs taking place Sept. 24-Oct. 2, 2022, at VIRginia International Raceway (VIR).

Beginning at 8 a.m. EDT Thursday, each of the 26 car classes competing at his year’s Runoffs in Alton, VA, will have one final 20-minute qualifying session around VIR’s 18-turn, 3.27-mile circuit. Motorsport fans around the country can follow all the action online at SCCA.com/live. There, you’ll find live timing/scoring, and an audio broadcast featuring commentary from longtime Runoffs announcers Tom O’Gorman, Larry “Lefty” MacLeod, Gregg Ginsberg, and special guests.

Looking for a Super Sweep

Established in 2009, the SCCA Road Racing Super Sweep is the most demanding accomplishment a Club racer can achieve. To merit the award in 2022, drivers must win a U.S. Majors Tour Conference Championship, a Hoosier Racing Tire SCCA Super Tour Nationwide Points Championship, and a National Championship Runoffs race at VIR — all within a single class in the same year.

Tons of skill, time, and commitment go into being a Super Sweep winner. In 2021, only six drivers earned the honor. Those competitors were Andrew Whitston in Formula Vee, David Daughtery in B-Spec, James Jost in American Sedan, Tim Kezman in GT-2, Kurt Rezzetano in Touring 2, and Danny Steyn in Super Touring Light.

At VIR this year, 20 of 26 Runoffs races could produce a Super Sweep winner – and upwards of 30 drivers are still in the hunt before Hagerty Race Days begin. Some drivers only require a Runoffs race win; others need a combination of factors to align.

It’s a complicated equation, especially when a Runoffs performance counts toward the Hoosier Super Tour Nationwide Points Championship. The best way to stay atop developments is to tune to SCCA.com for Runoffs Hagerty Race Day video coverage presented by Mazda, or follow along at SCCA’s official YouTube or Facebook social media channels.

The following list contains drivers who are class leaders after the second day of qualifying (also known as Hawk Brake-Through Performance Wednesday) for the SCCA National Championship Runoffs being held at VIR. These provisional results include driver name, hometown, SCCA Region, car, and fastest lap time. Bolded entries indicate a polesitter change from Tuesday to Wednesday.

If you’re reading this Wednesday evening from somewhere other than VIR, then there still might be time for you to make it out to Alton, VA, for Thursday’s Tire Rack Pole Day. Spectator admission starts at a mere $20, and you can learn more here. Those who are SCCA members can get a 20 percent discount on tickets by logging in to their membership account portal at SCCA.com. And Hagerty Drivers Club members can get 20 percent off admission by snatching up tickets here.

Those who can’t make it to VIR can still enjoy Hagerty Race Days – which are Friday, Saturday, and Sunday – with multi-camera video coverage, presented by Mazda, broadcast live, online at SCCA.com. That broadcast features the voices of Greg Creamer, John Fippin, Larry “Lefty” MacLeod and Tom O’Gorman, with Heyward Wagner covering pit lane.

Photo: After posting “no time” Tuesday during qualifying, David Pintaric jumped to the top of the GT-1 field Wednesday in the No. 57 Kryderacing/Ave Motorsports/Goodyear Ford Mustang.