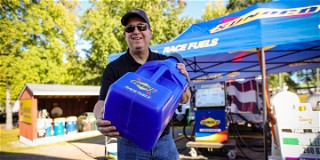 For a third consecutive year, stakes were raised on Tuesday for drivers during SCCA Runoffs qualifying. From the moment the first green flag dropped shortly after 8 a.m. local time at VIRginia International Raceway on Tuesday, Sept. 27, drivers were gunning not only for the fastest time in the first of three days of qualifying, but they were also in the hunt for a significant bonus from Sunoco Race Fuels.

Since 2020, the opening day of qualifying at SCCA’s National Championship Runoffs has been “Sunoco 260 Tuesday.” This year, the driver in each of 26 car classes whose best qualifying time came closest to including .260 earned 15 gallons of Sunoco race fuel for their car, plus a handy five-gallon Sunoco gas jug.

In addition, the several hundred SCCA volunteers working behind the scenes at the Runoffs were treated to lunch – thanks to Sunoco.

The day is called “Sunoco 260 Tuesday” in recognition of Sunoco’s 260 race fuel, which has been highly regarded for many years. Sunoco’s 260 GT is a street-legal (in most states), oxygenated, unleaded gasoline designed for high performance street cars, muscle cars, classics, street rods, motorcycles, and the like. With a 100-octane rating, Sunoco 260 GT allows increased boost levels in supercharged or turbocharged applications as compared to lower octane “pump” gas. It’s engineered to not harm catalytic converters or oxygen sensors, and contains a comprehensive additive package for greater engine protection and reduced fuel system deposits. It is compatible with two-stroke synthetic and mineral-based engine oils, and safe for carbureted and fuel injected engines.

Sunoco, Official Fuel of SCCA since 2001, has been powering victories on and off the track for more than 100 years, which is why Sunoco is trusted to fuel more than 50 series of racing, driving, and winning – including the SCCA National Championship Runoffs, SCCA Pro Racing series like Trans Am, as well as NHRA, NASCAR and more.

Below are the Sunoco 260 Tuesday winners from yesterday’s qualifying at VIR. The list includes class, driver’s name, hometown, SCCA Region, car make/model, and the qualifying time rewarded with 15 gallons of Sunoco race fuel. Winners can collect their prize by heading to the Sunoco fuel station found in VIR’s Main Paddock near the Pagoda. Staff at the pumps will have the official list of those receiving the free gasoline.

As a reminder, the Sunoco fuel station located in VIR’s Main Paddock near the Pagoda is where Sunoco 260 Tuesday winners can collect their prize.

Better yet, get to VIR and absorb the experience in person thanks to cheap spectator tickets starting at only $20 per person. Those who are SCCA members can get a 20 percent discount on tickets by logging in to their membership account portal at SCCA.com. And Hagerty Drivers Club members can get 20 percent off admission by snatching up tickets here.

For those who just can’t make it to VIR in Alton, VA, it’s possible to enjoy Hagerty Race Days – which take place this Friday, Saturday, Sunday – with multi-camera video coverage, presented by Mazda, broadcast live, online at SCCA.com. That presentation can also be accessed through SCCA’s official social media channels at YouTube or Facebook, and features the voices of Greg Creamer, John Fippin, MacLeod, and O’Gorman, with Heyward Wagner calling the action from pit lane.