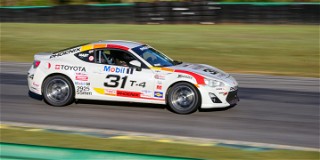 One done, but two more days of qualifying are to come for the 59th SCCA National Championship Runoffs taking place Sept. 24-Oct. 2, 2022, at VIRginia International Raceway (VIR). Beginning at 8 a.m. EDT Wednesday, each of the 26 car classes competing at his year’s Runoffs will have another 20-minute qualifying session around VIR’s 18-turn, 3.27-mile circuit.

This is only the second time SCCA’s Runoffs has been held at VIR, the first taking place just a few years back in 2019. But SCCA and VIR actually have quite a history together.

In 1955, a group of North Carolina car enthusiasts began their search for a possible racetrack location. They found a perfect plot of land, owned by the Foote family, near the state line shared by Virginia and North Carolina. The track was constructed and opened in 1957 as one of the country’s first permanent road racing circuits, and the very first official event was an SCCA race that attracted stars like Carroll Shelby, Carl Haas, Bob Holbert, and Augie Pabst.

The circuit played host to many great SCCA moments up until 1973 when it was forced to close. Twenty-five years later, in 1998, investors Connie Nyholm and Harvey Siegel decided to leave their careers in New York real estate to resurrect VIR. Their vision for the facility was more expansive than anyone could have imagined.

It was the year 2000 when the ghost track was renovated to become a repaved, world-class road racing circuit that followed an original 3.27-mile centerline. In addition, Nyholm and Siegel transformed VIR into America’s first “motorsport resort” that offered a racetrack, lodging, and dining; as well as skeet, pistol, and rifle ranges.

Prior to the 2014 season, Nyholm again led the charge to initiate several updates that included repaving the track’s Full Course for the first time since 1999, a project that widened the track by six feet at several locations to allow easier passing. The North Paddock was paved, and the start/finish line moved to just after pit row for better spectator viewing.

Car and Driver magazine recognized VIR as one of the top six road courses in the nation. The venue draws tens-of-thousands of spectators for great racing, as well as fantastic music festivals. It’s a patch of green heaven, filled with character, and a fixture in SCCA racing thanks to high-speed straights, challenging turns, and dramatic elevation changes.

Click the button below to watch a video on VIR’s history, as told by the people who made it happen.

The following list contains drivers who are class leaders after the first day of qualifying for the 59th SCCA National Championship Runoffs being held at VIR. The provisional results include driver name, hometown, SCCA Region, car, and fastest lap time.

Easily one of the most fantastic and exciting road race extravaganzas in North America, the SCCA Runoffs is a sight to behold. So much sound, color, action, and variety make it a #funwithcars motorsports masterpiece not to be missed. If you can get here, do it.

Spectator admission starts at only $20, and you can learn more here. Those who are SCCA members can receive a 20-percent discount on tickets by logging in to their membership account portal at SCCA.com. And Hagerty Drivers Club members can get 20 percent off admission by snatching up tickets here.

For those who just can’t make it to VIR in Alton, VA, it’s possible to enjoy Hagerty Race Days – which are Friday, Saturday, Sunday – with multi-camera video coverage, presented by Mazda, broadcast live, online at SCCA.com. That presentation can also be accessed through SCCA’s official social media channels at YouTube or Facebook, and features the voices of Greg Creamer, John Fippin, MacLeod, and O’Gorman, with Heyward Wagner covering the action in pit lane.

Photo: Marshall Mast, in the No. 31 Phoenix Performance/Hawk/Mobil 1 Scion FR-S, was the fastest Touring 4 driver Tuesday during the opening day of qualifying at the Runoffs.