Have Tent, Will Race at #SCCARunoffs 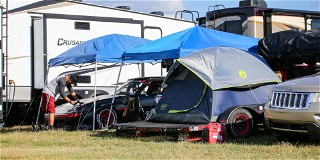 What does SCCA member Yuri Collazos have in common with a mountaineer summitting Everest? They both live in a tiny tent while attempting to complete a monumental feat.

One blue pop-up serves as shelter for his No. 77 Star Wars Racing/Rotec Motorsports Mazda RX-7, which he’ll be driving in the E Production (EP) class. The other pop-up provides shade for his work and living space that includes several containers packed with equipment, as well as a small grill, cooler, scooter, two foldout tables, and a folding chair. He also has a small generator powering a miniature coffee maker, small space heater, and phone charger. Then perched atop the open-air trailer is a small tent, which Yuri calls home for the next several days.

Sure, the accommodations appear meager amongst some multi-car haulers and fancy motorhomes, but the lodging allows Yuri to fulfill his dream, the dream of racing with the Sports Car Club of America.

“I kind of have to do it this way with the budget I’m working with,” Yuri said. “You figure hotels are $150 a night, then you’ve got three nights … and that’s money that could be used for more parts, another engine, or something else to improve the car’s performance. I’ll sacrifice a little comfort so I can do a little something better to the car. If that means I have to be in a tent, then I’ll be in a tent.”

Growing up in Panama, Yuri watched SCCA racing on SPEED Channel and couldn’t wait to jump into the action. He joined SCCA in 2019, is a member of the Florida Region, and drove 900 miles to be part of this year’s National Championship at VIR, which will actually be his second Runoffs appearance – the first taking place last year at Indianapolis Motor Speedway.

“This year the goal is the same as last year, and that is to finish,” Yuri said. “I want to run every session … and hopefully finish in the top 10.”

Yuri, a 50-year-old who works in supply chain logistics, is a one-man band when it comes to his racing program. He drove the 900 miles from Homestead, FL, to Alton, VA, by himself. And at VIR, he’s all by himself, serving as crew chief, lead mechanic, race engineer, strategist, and more.

Like any major accomplishment, it’s rare for anyone to actually do it alone. For instance, an Everest climber relies on Sherpas. In Yuri’s case, he counts on help from the SCCA family. That was certainly on display Monday at VIR when Yuri’s engine was running a little rough around VIR’s 18-turn, 3.27-mile circuit during practice. After pulling back into his paddock spot, friends Luis Rivera Jr. and multi-time EP National Champion Jesse Prather showed up on the scene to diagnose the problem and get the rotary engine growling again.

“SCCA is the best racing organization. The family and people are incredible,” Yuri said. “Hanging out with SCCA people is as much fun as being on the racetrack … and I love that.”

Keeping Up with Yuri

SCCA.com/live is where you can follow the progress of Yuri and all the Runoffs competitors during qualifying with live timing/scoring, and an audio broadcast featuring commentary from longtime Runoffs announcers Tom O’Gorman, Larry “Lefty” MacLeod, Gregg Ginsberg, and special guests.

If you can be trackside to support racers like Yuri, that’s even better. Single-day spectator admission starts at only $20, and you can learn more here. SCCA members can get a 20-percent discount on tickets by logging into their membership account portal at SCCA.com. And Hagerty Drivers Club members can get 20-percent off admission by snatching up tickets here.

On Friday, Saturday, and Sunday – which are Hagerty Race Days – multi-camera video coverage, presented by Mazda, be broadcast live, online at SCCA.com. That presentation can also be accessed through SCCA’s official social media channels at YouTube or Facebook, and features the voices of Greg Creamer, John Fippin, Larry “Lefty” MacLeod, and Tom O’Gorman, with Heyward Wagner covering pit lane.